His wife is going to strangle me for that title,
but it DID get your attention, right?

It's Spring, Rehabits, and we're all scrambling around the yard trying to outdo those stupid
neighbors...you know the ones.
There's no duct tape on their swing sets.
Their dogs have all four legs.
Nothing is nesting in their cars.
Their children don't wear hand me down undergarments.
There is no chronic standing water inside their homes.
They've never been arrested at work.
How can anyone match up to people like THAT?

My best friend Michael is one of THOSE.
And he's about to show us his tidy back yard.
Again.
We got to watch him build a deck two years ago;
now let's put in some raised garden beds, shall we? 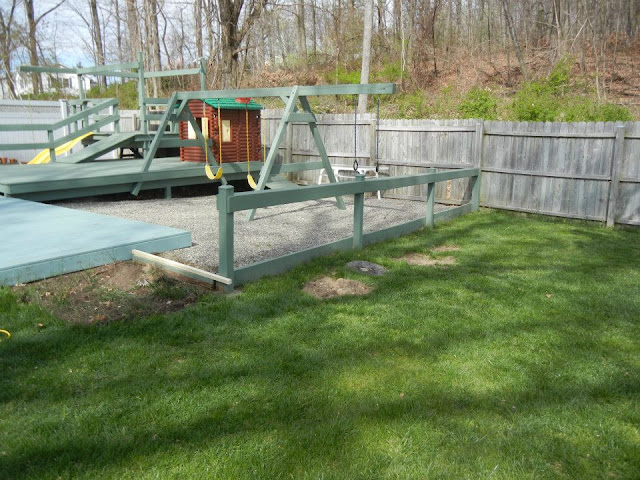 A good portion of the yard is already decked in or has weed blocker topped with gravel.
It's a perfect space for entertaining friends and family, even the shorter generation
(Michael's two sons are grown).
Somewhere between the sunroom, the grilling station, and the bocci area,
he was having a little garden envy.
I think hearing The Redhead brag year after year about tomatoes and sage finally got to him. 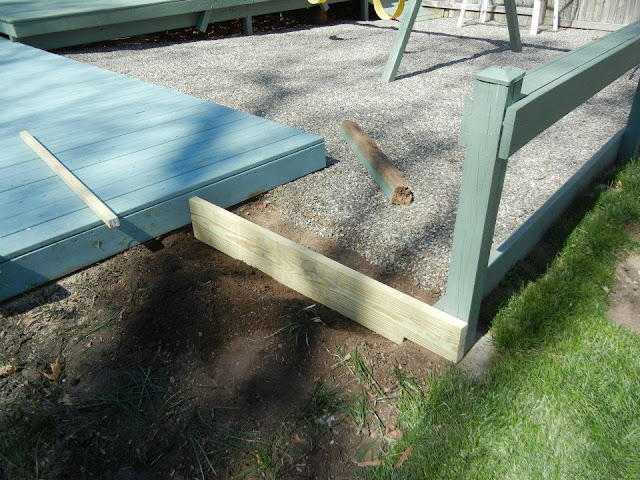 My cheapness frugality got to him too,
so when he plotted a spot for the plot, he cut sod from there to fill in the former flower bed space. 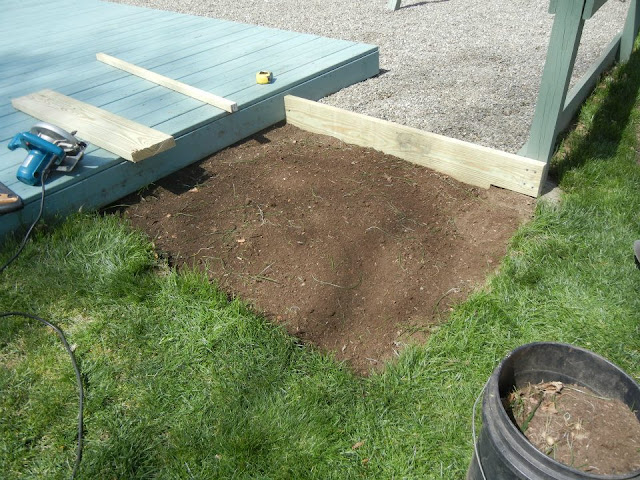 Clear the area so the edges are even.
This will make the filler seamless. 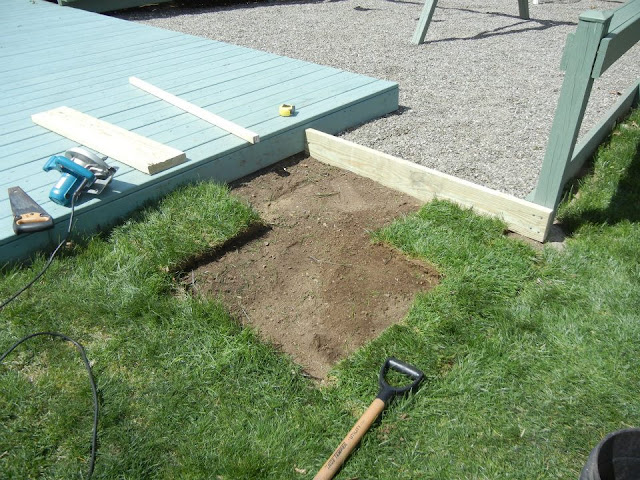 Cut the sod from the area to be cleared and simply transplant! 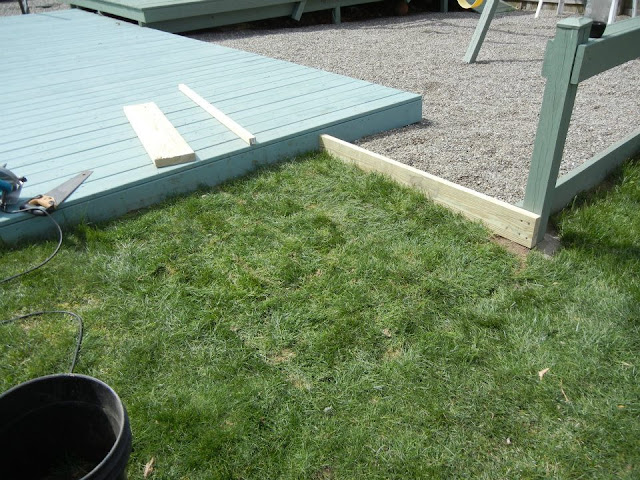 This will grow in quickly.
Now how about some details?

The Redhead: So when can I bug you for instructions on your raised bed, if you're still willing to let me blog it?
Michael: It's pretty much the same as the last one
Michael: The real key is the Timberlok screws, which I did closeups on with the flower boxes
Michael: Other than that......
Michael: Measure, cut, screw, fill with dirt, plant
The Redhead: Anything you want to highlight about placement, height choice?
Michael: Oh... very important.......
Michael: Have the wood DELIVERED
The Redhead: Hee hee, I'm not writing that
Michael: Height...... as high as you can afford?
Michael: I'm already thinking to next year when I might add another row or two
The Redhead: Why did you choose 1 foot?
Michael: I wanted three rows of wood for structural reasons
Michael: because I was on a slope the front got four 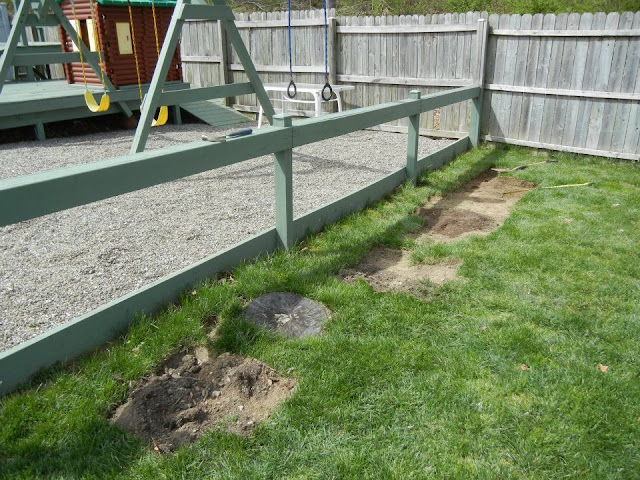 A raised bed is simple.
To determine how high you want it, bend over.
Measure the distance from the ground to your comfortably outstretched hand.
That's how high your garden should be.
It's either that, or start working out a little. 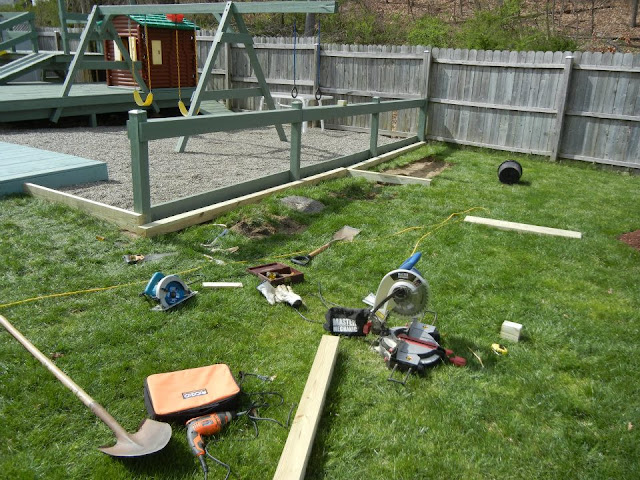 Clear the ground where you intend to plant.
The more of your toys you display, the more impressed the neighbors will be. 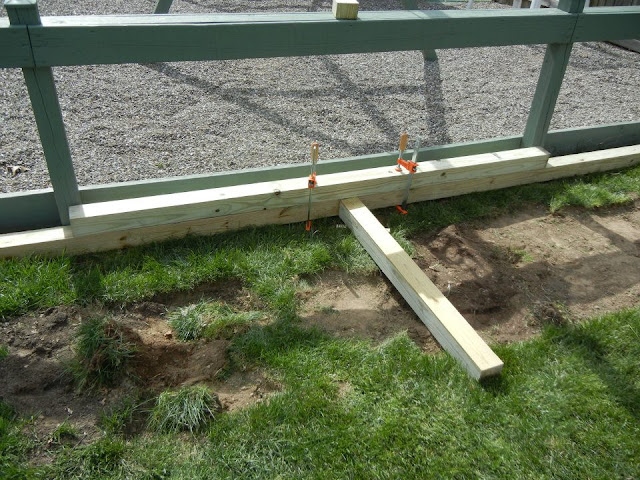 A combination of wood screws and glue are going to make this creation immobile. 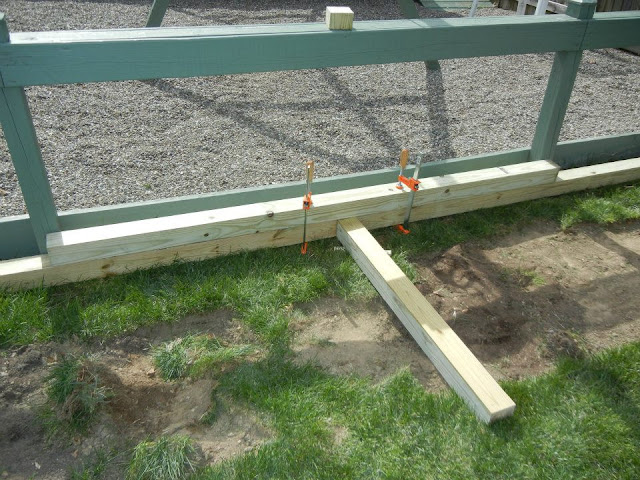 Center cross-brace so the box doesn't bow when filled.
A bed this side needs reinforcements. 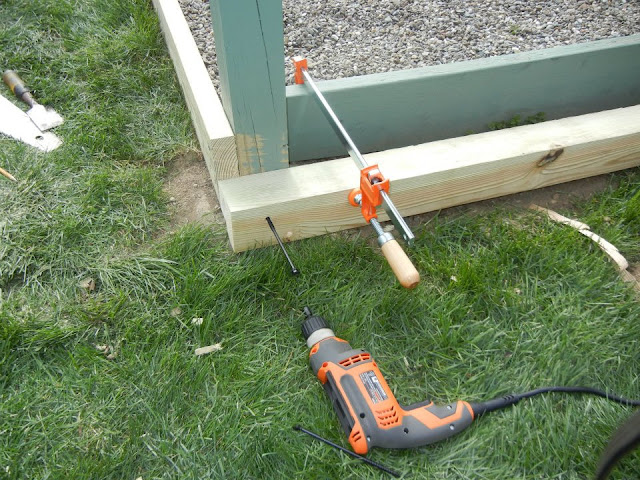 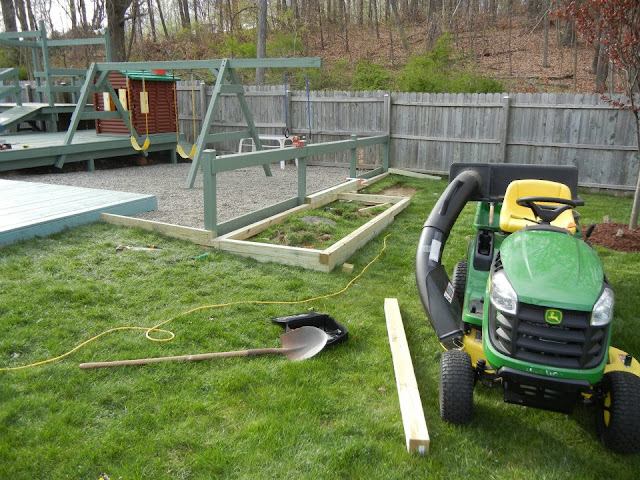 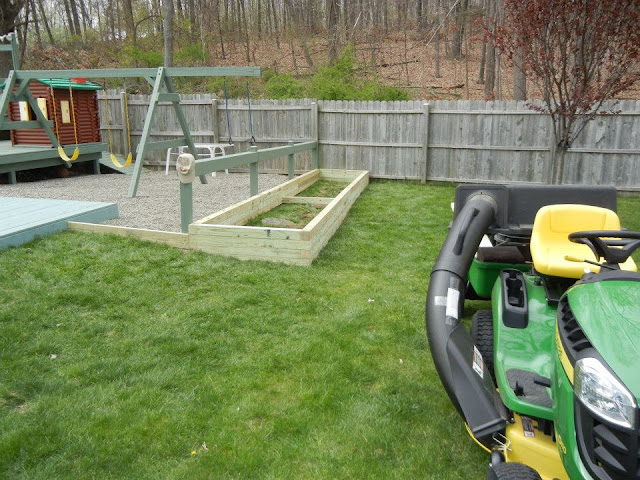 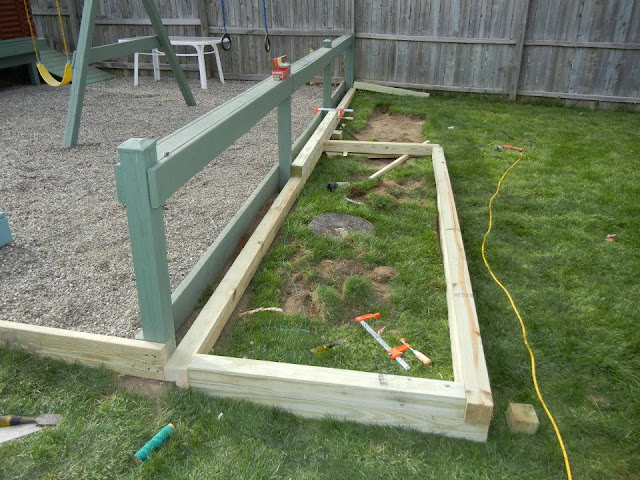 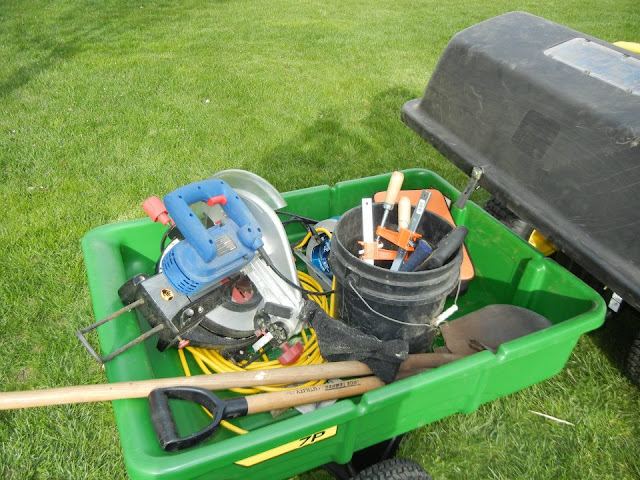 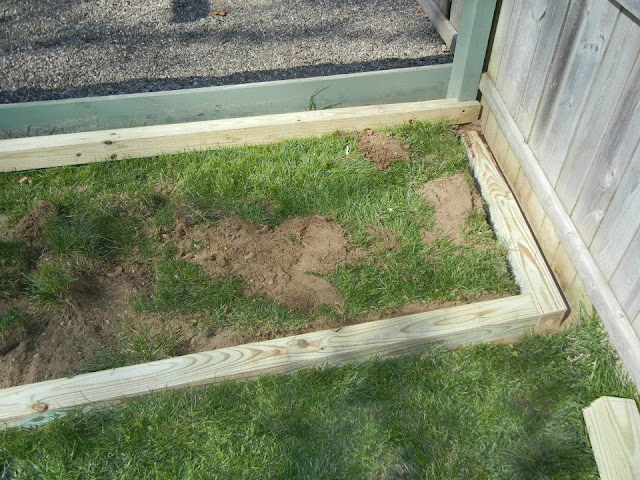 The four by four lumber was chosen to compensate for the slope of the yard.
The girth will also cut down on bowing and make this last several more seasons. 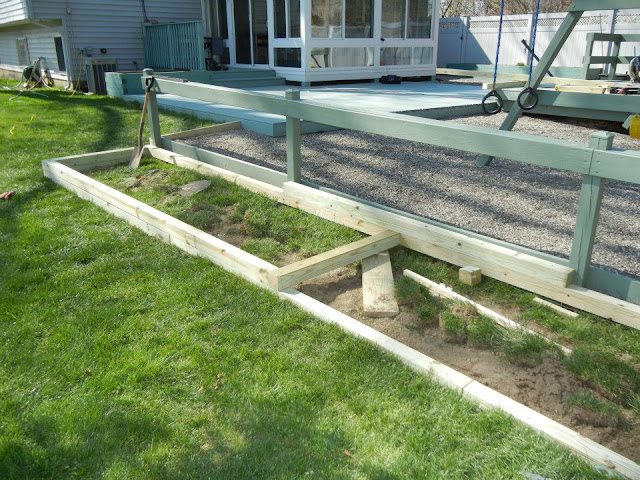 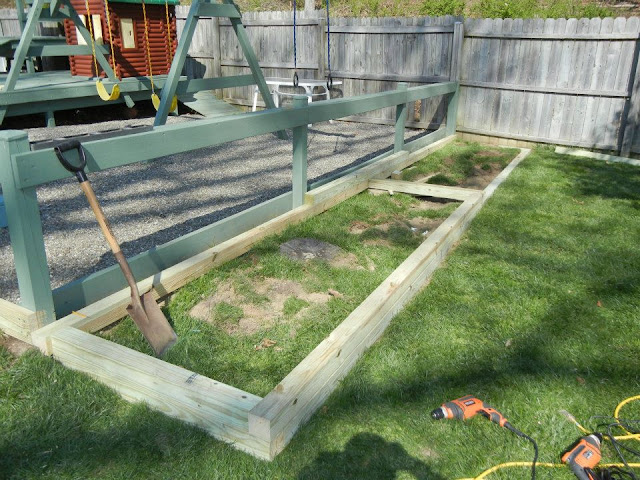 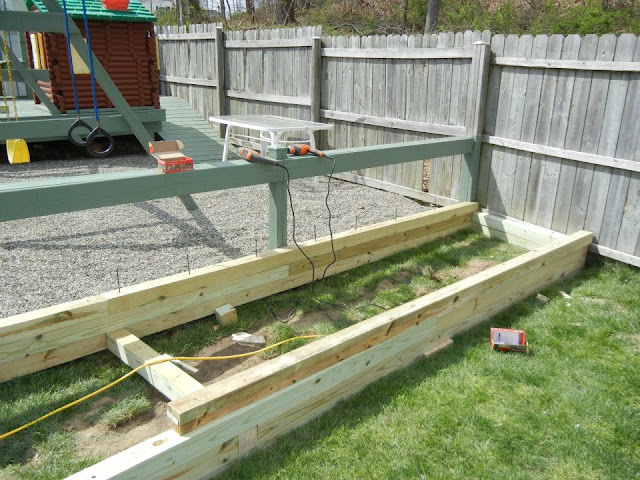 Not to mention, although he did, he can add height later. 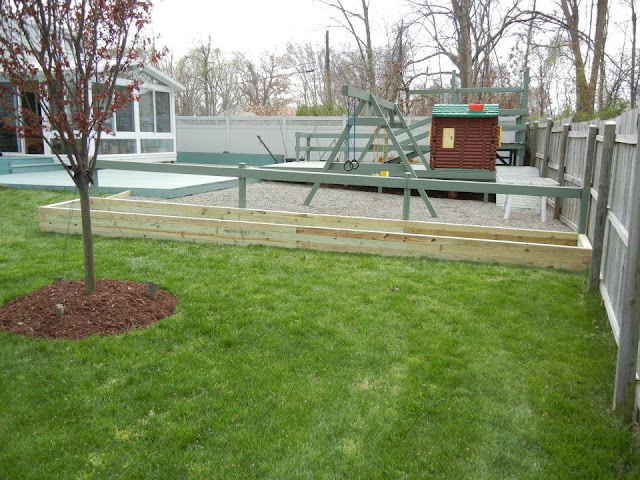 All he needs now is dirt. 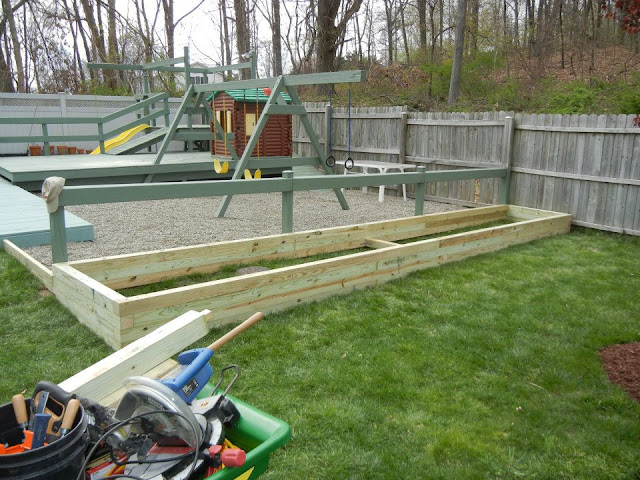 Doesn't that look tidy and compact while still providing tons of planting space? 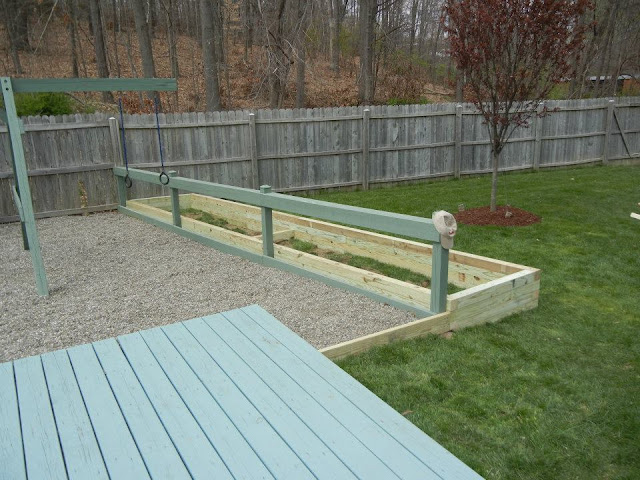 Get the seedlings, I'll make the mockaritas.
Posted by Life in Rehab at 10:36 AM

This is seriously sweet. Not just the title, but the post and photos too :)

I need to get my garden in ship shape. Need to top it off, and maybe I should just rebuild with 4x4s like this.

I have tons of seedlings in egg cartons that are wilting because they need to get in the real ground.

Am I an "official" Rehabit? Michael needs to come for a visit, don't tell his wife. It truly will be to build me one of these in the yard :)

Now that is impressive. And I have made a mental note to have my wood DELIVERED! Thanks, Michael (& Sunny)!