It's Great To Be Home is participating in a fun blogger game where you reminisce about your first and sixth posts EVER, then you tag other bloggers to do the same. If you decide to accept, leave me a comment so I can see what you thought of your own early handiwork!
134 posts ago on September 27, 2009, I'd recovered enough from the fire to subject my readers reader to this: 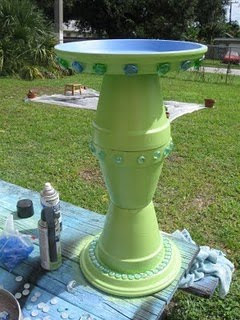 Actually, I still like this project a lot. The post however is kind of rambling and dry. But I was determined to get my life back on track and get really energized with my new bloggy hobby. I should probably go back and tweak this stuff a little. In my spare time.
A month later, on October 27, I decided to show the world how beautifully I decorate: 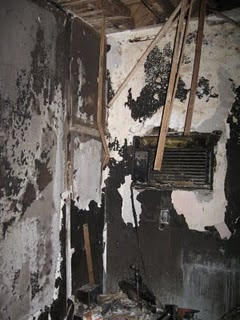 It had been two months since the fire, and we’d had all of the adjusters parading in and out for weeks. We finally had clearance to start ripping the damage apart, and we went at it with gusto. The children got a twisted sense of pleasure from learning to demo something without my usual warnings (“Don’t hit the walls while you’re shredding that floor!”). They were almost wrestling over who got the crowbar. And we did get tons of pictures of the whole fiasco.
It’s hard to believe this is the same view six months later. 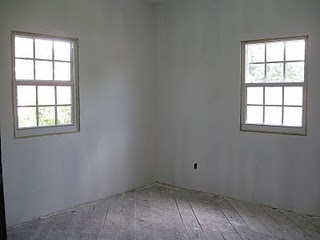 So 7 months. I’ve only been at this for 7 months. I guess that’s not really too bad. When I launched my first post, I had no header, one follower, no picture on my profile, and no real path or plan. The first couple of ads that appeared were for rehab facilities (I had to laugh at those. I’ll bet they got zero clicks!).
Mere days after the August 16th house fire, when we got partial electricity back, I was doing a web search for remodeling ideas. I was determined to come back from this as quickly as possible. I’m not one to wallow, seriously. I was going to start at This Old House, and This Young House appeared in the search. Click. Helllllooooooo, John and Sherry Petersik! Sheer luck, since they changed their name to Young House Love soon after. I found out they had started blogging about their first home and fixing it up to keep friends and family up to date on their progress. Well, to tell the truth, I WAS kind of anticipating a phone call or two, so this might be a way to answer those questions and keep me motivated. But do other people do stuff like this?
Um, yeah…and I started discovering there’s a whole lot of us out there inviting random strangers into our homes and lives, and becoming internet friends along the way. And have you noticed how encouraging and positive everyone is? You spray paint a box, and your cheering section shows up to tell you they love it! How awesome is that?
On days when the lack of privacy, one working bathroom, the sliding glass door that’s jammed open, the wreck of a yard from trucks driving through it, torn up floors and boarded up areas start to get to me, I can always log in here and read my latest encouraging, kind comments, and all I can do is smile.
Thanks guys.
Posted by Life in Rehab at 2:13 PM

I love this post! And it's so true about people in the blogging community keeping your spirits up - it's a great thing to be a part of. :)

Thanks, Liz, and thank you for making me really think about all of this. I hadn't examined how much this has probably helped me stay positive and energetic.

Aw, that was a really great post. That's one thing I really love about this community here - everyone's so positive and friendly and encouraging. It's great. :)

Awesome post! I really admire the way you handled such a heart breaking situation. You didn't spend one second of this post feeling bad for yourself, though I totally wouldn't have blamed you one bit. And so true about the blog. I don't think I'd have done nearly as much to our house without so many awesomely kind strangers.

P.S. - Your proposal story made me smile. The bar in an uproar while you were caught totally off guard sounds so perfect! Congratulations on 21 years of bliss!

A wonderful post. Thanks for writing it, but more importantly, for sharing it with all of us.

hey Sunny, I just posted about my 1st and 6th.

Hey, it's the truth, and it's almost an obsession to stalk all of you on a regular basis. Isn't it cool to friends you can drop in on anytime?

What a great idea!! I don't know if I'm brave enough to try it yet.
I love the birdbath made out of flower pots!! And hearing how you got into blogging and about the fire and the damage is really inspiring.