How to Make a Death Ray

I promised a Death Ray, and I do try to deliver, so without further ado, here's a post from my oldest son, Sam, who is heavily into theater and film, about helping his sister with her first play:
Hey ho, this is the son of this blogger, Sam. My sister and the drama department at her school are doing a stage performance of "Doctor Horrible's Sing-a-long Blog" and they needed help. What they needed were some props for the show and the props were the guns used in the movie. My friend Chris and I were up to making the guns, this post is on one of them: The Death Ray. We took several different parts from random things that were lying around: 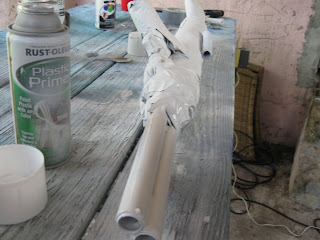 We put all of this stuff together with hot glue and duct tape. After attaching and securing everything, we spray painted the entire thing with Plastic Primer. The Primer is used to make a sure that the final coat of paint will stick better. 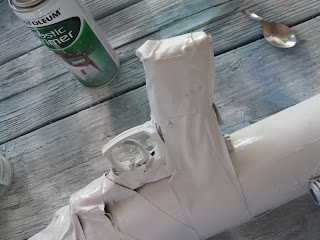 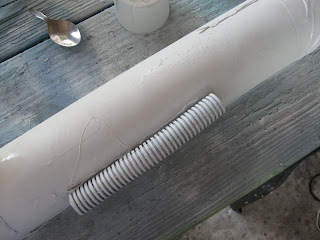 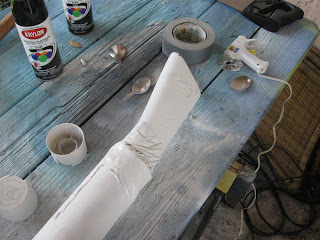 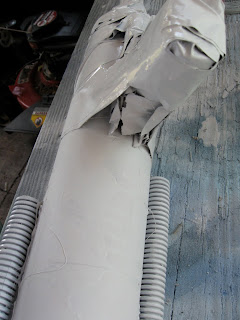 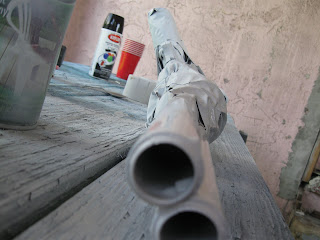 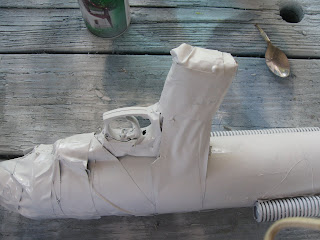 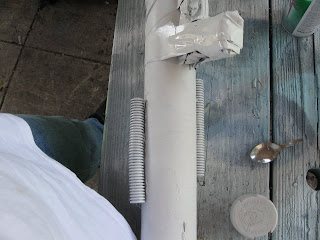 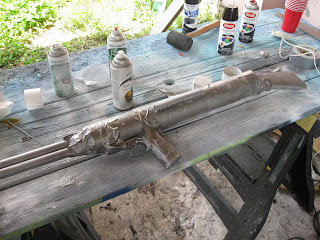 After twenty or so minutes I spray painted it gun metal gray. 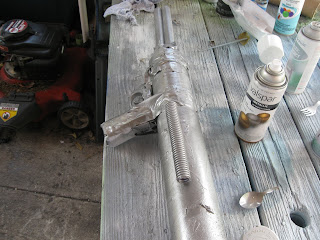 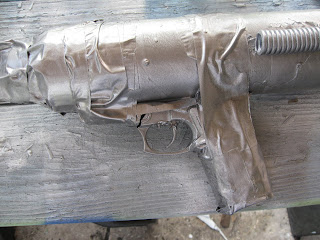 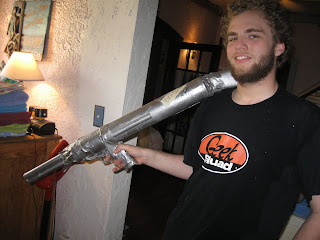 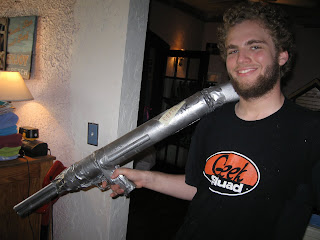 For the final touches, I Sharpied "Stun Ray" and then put "Death" on tape and put it over "Stun". If you see the movie they actually do that for one scene. So there you have it. A Death Ray fit for a play. 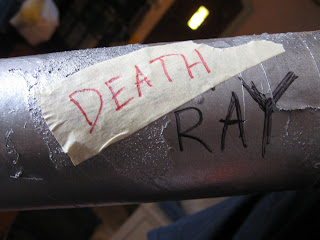 I hope this looks good and stays together, and I hope it was awesome for you to see it come together.

Totally Cool Receipt:
Junk, trash, and broken toys: FREE
Leftover spray paint and tape: FREE
Getting along with your siblings this well: Priceless
Taking over the world: We'll let you know
Posted by Life in Rehab at 8:54 AM

Labels: You Made It Out of WHAT?

Hahaha, love it! It's perfect for a play.

My little geeklettes are too cute. And it's nice to see my crafting has rubbed off on them in whatever twisted way.

OMG this post seriously has me cracking up and giggling out loud!

My son would totally flip over this Death Ray. I think my favorite part is that you used a piece of tape and wrote Death Ray on the gun. Like, just in case we didn't know what it was, there you go!

Thanks for the tutorial. I must make one for my son now. He's so into Star Wars. (This is from Star Wars, right??!?! I so should not be allowed to have a son.)

Thanks for the great tutorial and the laugh!

Oh, you're fine as the mom of a little boy. It's from an internet movie called "Doctor Horrible's Sing-a-long Blog" which stars Neil Patrick Harris from How I Met Your Mother, and it's drop-dead hysterical, but it's 10 years in your future kid-wise. My daughter's theater group is performing it on stage. It's for older kids for sure, and grown ups. But hey, anything duct taped together and spray painted silver would make an ultra-swell Star Wars weapon!

LOL! SO FUNNY! This is any boys dream building a TOY death ray! ;)

Thank you SO MUCH for linking up with What are little boys made of? (Because truly this IS what little (and not so little) boys are).

Oh, you're telling me!