The Wall. No Pink Floyds Were Harmed 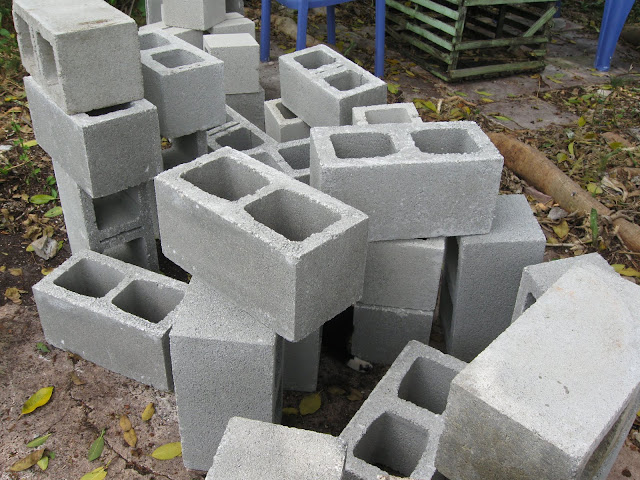 Okay, I already had 16 cinder blocks on hand. I'm a little bit redneck, don't ask. I'm sometimes surprised my dog has more than three legs. Anyway, so I grabbed the oldest Teen Minion (who became oddly suspicious when I told him to bring leather gloves for us both), hopped in the 1989 S10 pick up, and headed for Home Depot where we purchased twenty-five cinder blocks, eight half cinder blocks... 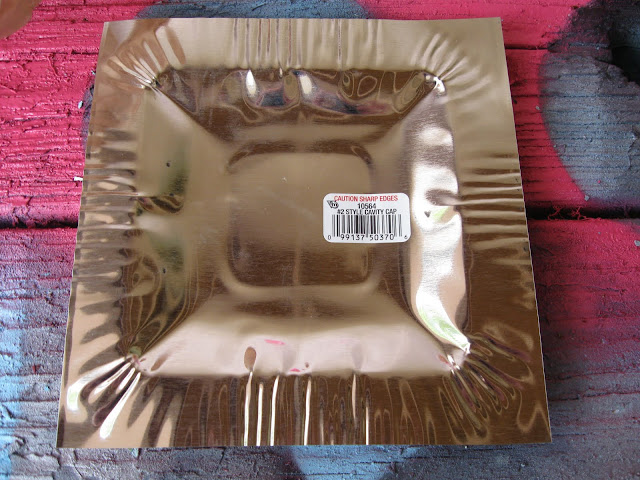 ...and thirty of these little mystery doodads. They're called block caps, and I'd nabbed a few a couple of days ago as I tweaked my design. I knew most of you had never cut cement block to size as the original project called for, so I came up with a very inexpensive alternative that worked like a charm!
I also bought 3 tubes of PS300 construction adhesive. 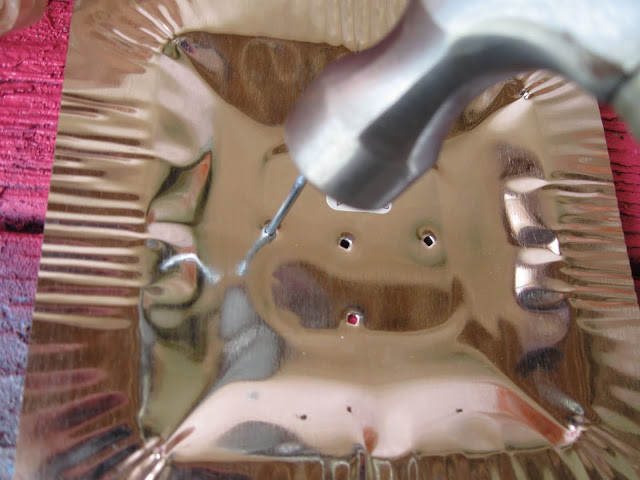 You'll need a total of two tools for this: a hammer and a caulking gun. First, stack the caps 4 deep and drive a nail through them a few times to create drainage holes. 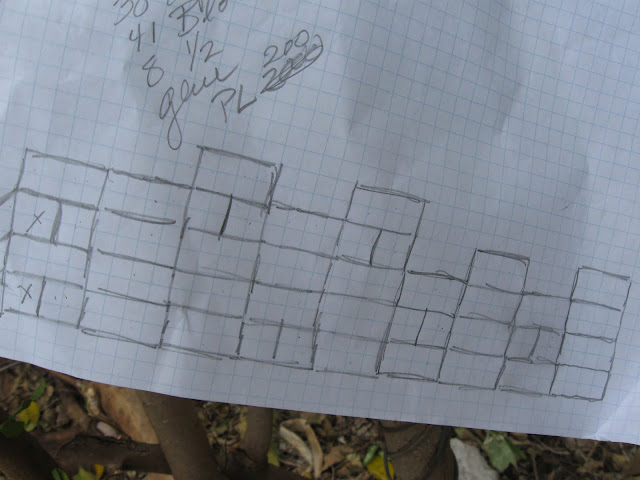 Have a plan. I sketched out my design on plain old graph paper. 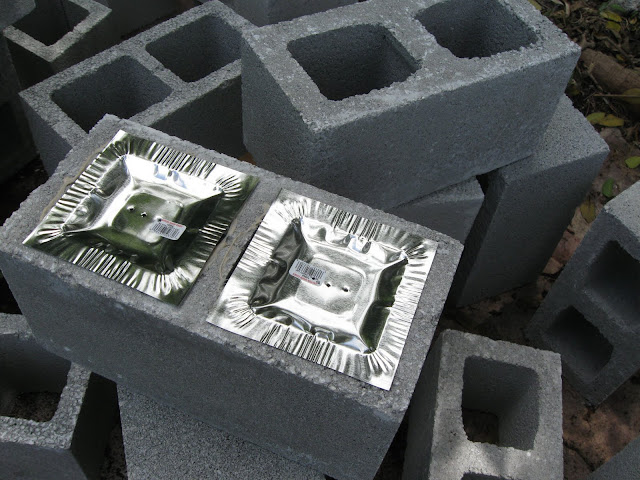 Using the construction adhesive, glue the caps to your "juts," the pieces that will stick out. 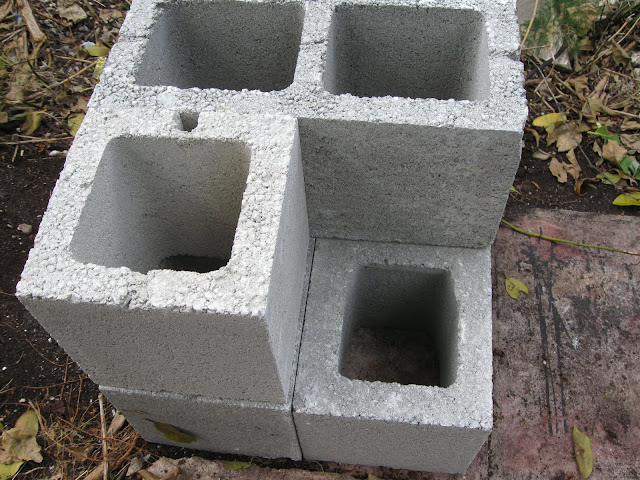 Dry stack your wall. Build the whole thing without adhesive first so you can double check your design. 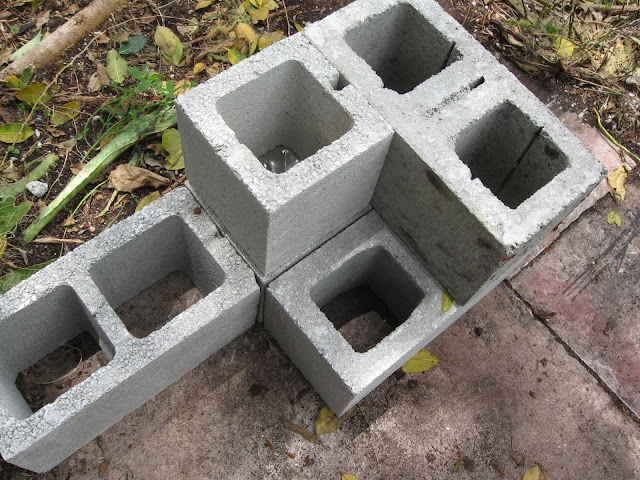 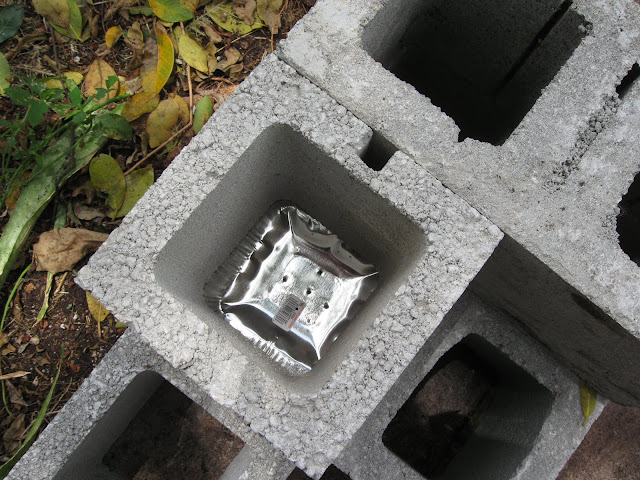 Under each top block, simply place a cap to hold the soil. 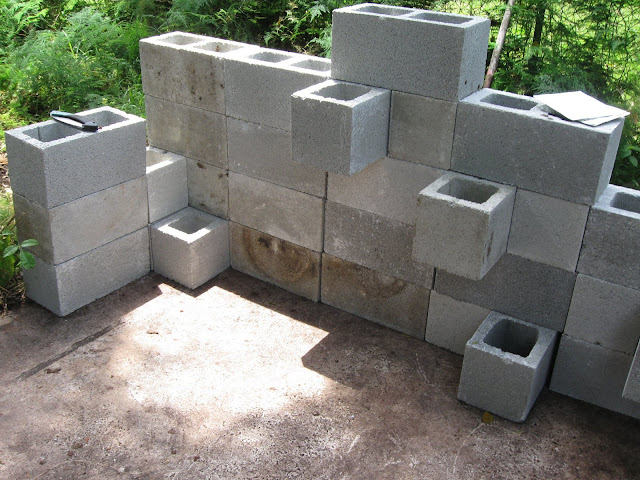 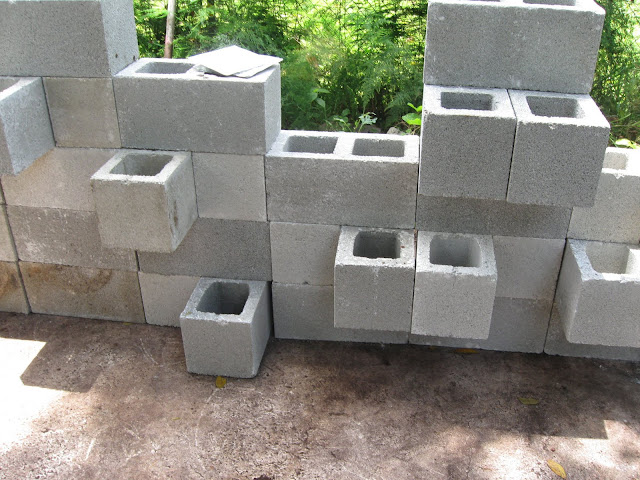 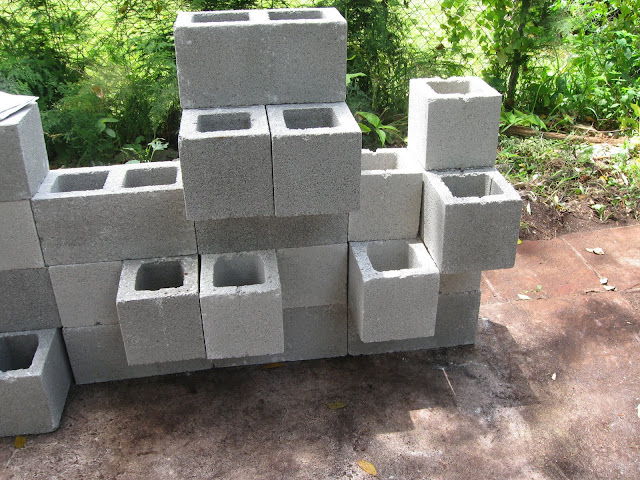 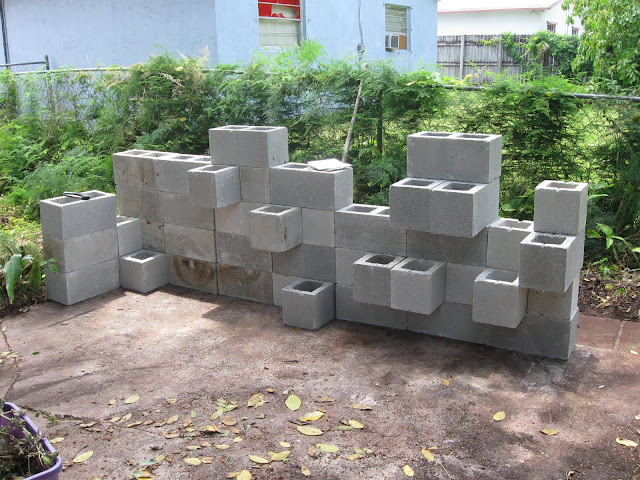 Now, take a minute with a glass of wine to scrutinize your wall. Second guess yourself and text a couple of pictures to your buddy Michael to get his input. 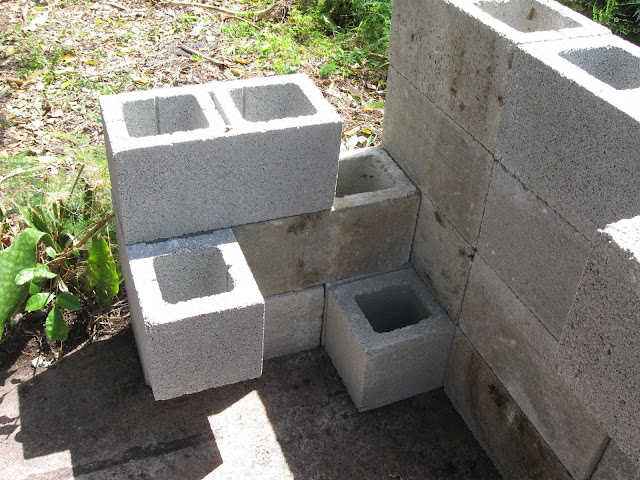 Give his suggestion a try and decide that you like it better. 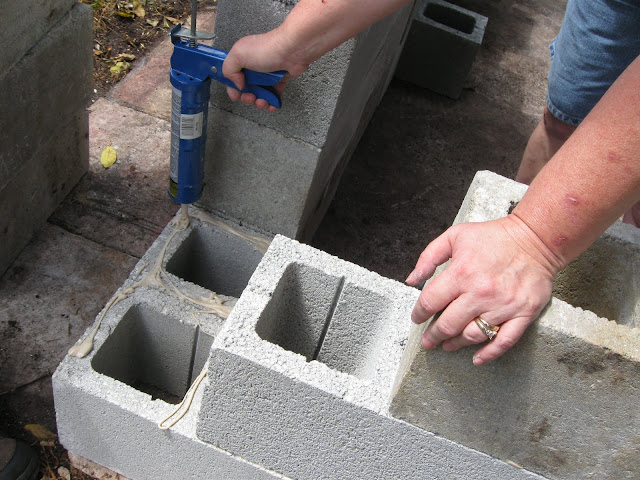 Then one section at a time, start running a thick bead of construction adhesive around the blocks and restack them. Anywhere I did a "jut" I used a half block to fill in.
l 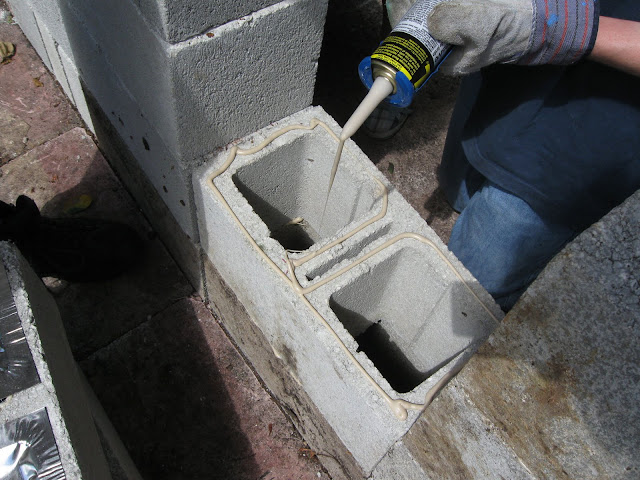 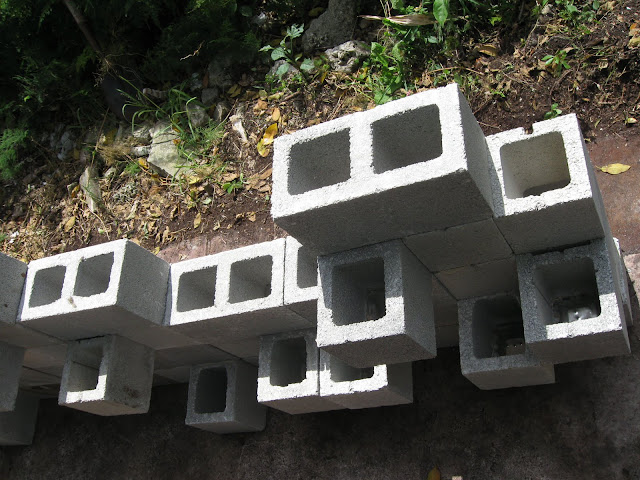 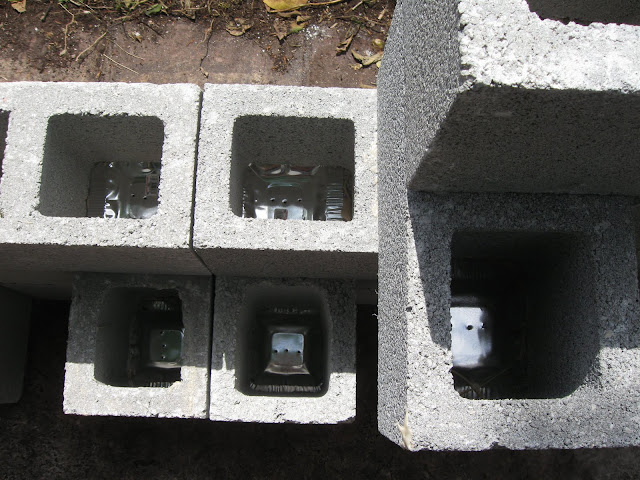 Remember to place the caps under the top blocks. This will save you a ton of soil. 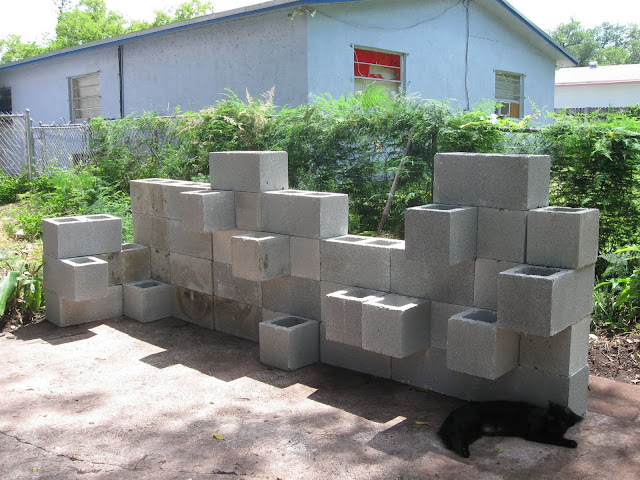 Grab another glass of wine, sit back, and be amazed at the nifty raised bed you just built. Basically without tools. This is a beginner project with great results if ever there was one. And we obviously have Feline Overlord approval.
Totally Cool Receipt:
25 cinder blocks: $30
8 half cinder blocks: $9.20
30 block caps: $5.40
3 tubes of adhesive: $11.94
$56.54 for the focal point of my new patio area? OH YEAH!
Next, let's add some flowers and herbs, shall we?
Anyone here for the first time, the last stage of this project can be seen HERE.
Posted by Life in Rehab at 9:06 AM

Oooh, I can't wait to see what you put in it!

Sweet! That is so awesome. Wayy cool. Will you paint it too? Or leave it as-is? Ohh, I can't wait to see it with flowers!

Hello Ladies, thanks for stopping by! I think I'll leave this one au natural. I actually like the industrial look of it. And the screen project that's next will soften it, as will the plantings.

This came out so flippin' awesome!! You should show the inspiration wall right next to it. Love this!!! Blowing my mind again....

Looks so cool! Even though you're leaving it au natural...I could totally see the back side as a graffiti pad.

Why thank you! And I was looking through your posts to find your wall...what's it titled?

fabulous, really! I'm picturing it with green and colour and it's going to be stinkin' gorgeous.

Well thank you Mel! Guess what I'll be linking up soon?

I am looking to do something in my yard this year (inexpensively of course) and I am just completely WOW'D by this. I think I've just found my solution!
Thanks for sharing this awesome idea.
Lisa

I'm glad you popped over. I took a quick peek at your blog; I know what I'll be doing over lunch!

Sunny are you talking to "me" Heather?? What wall (if you are?).

I also meant to tell you this project looks fun, especially the wine part. ;)

-heather
ps..ready to buy some spray paint after a fruitful trip to GW!

You're going to laugh at me: I misread your comment and thought it said "my inspiration wall," and I couldn't remember that post on your blog, so I was looking everywhere! Then I read it correctly and felt like a dork.

I was pretty sure I hadn't posted a wall (not an outdoor one at least). Thanks for looking thru me old blog though!!

Great tutorial - I can't wait to see it with flowers and herbs! Thanks for linking up to Be Inspired today.

This is totally brilliant!!

I LOVE THIS!! Please show it off on Modern Craftswoman Monday. Brilliant!
Rory

Thank you for the compliment, and the invitation. I'll be there!

Great tutorial!! Great idea too!!
Thanks for sharing and linking up to I'm Lovin' It! Have a FABULOUS weekend!!

That looks awesome...once you have all that gorgeous greenery in there you are going to be in love!

This is truly amazing! I am totally lovin' it! :)

I just wanted to let you know that I featured you here:

WOW. Luv'd this. I also was thinking about the paint.

Thanks for participating in Modern Craftswoman Monday. This was one of my very favorite projects I saw last week. Again, a really great job and be sure to post more photos when you get your plantings in.
Hope to see you join next week with more fun projects or just an update.
Rory

It looks great! Can't wait to see it with plants...it will be amazing!!!

What a cool idea! You will have to post again when you get the flowers growing in it!!!
~Bridgette

Today's post was the update with plantings and plenty of color! Make the hop here:

And thank you for stopping by!

I believe that every project should be accompanied with a glass of wine. I am so glad to know there is someone else out there who agrees with me! I love the cinder block wall. I just did a post on how to redo hardwood floors, and trust me, several glasses of wine were involved.....:
http://www.potholesandpantyhose.com/A/Home_Life_Archives/Entries/2010/4/22_How_to_do_it-_Sanding_Hardwood_Floors-Part_Uno.html

Rebekah,
You're my kind of handywoman. Salut!

I saw your project over on a Soft Place to Land and wanted to stop by and say how much I love it!! I've been looking for something to do in my yard that would be a focal point and take up a lot of space, but not be expensive or difficult to maintain. This is perfect!!

I told you this was stinkin' fab! Now you are being featured all over the town :)

Wow... I love this! I can't wait to find a spot to do this. And I would love to link to this as well if you didn't mind.

I love the idea of the cinder blocks as a wall & focal point! I made raised beds with them and did mosaic (http://growandresist.wordpress.com/2010/03/04/whimsical-raised-beds-make-them-now/)
Now I want to find some more cinder blocks! Thanks for the idea!

I love your project and your blog! I am going to build myself one of these, but I can not for the life of me find these block caps you speak of. Where did you find them?

Those were right there in the construction aisle near the blocks. They are usually used to top the blocks when you're building a wall so you don't have to waste mortar in the cavities. Hope it helps!

Very creative and very inspiring. You did a wonderful job and it looks great! Now if I can just fine somewhere to do something similar....Hmmmmm

Thank you for sharing!