Fancy a Spot of Pudding? 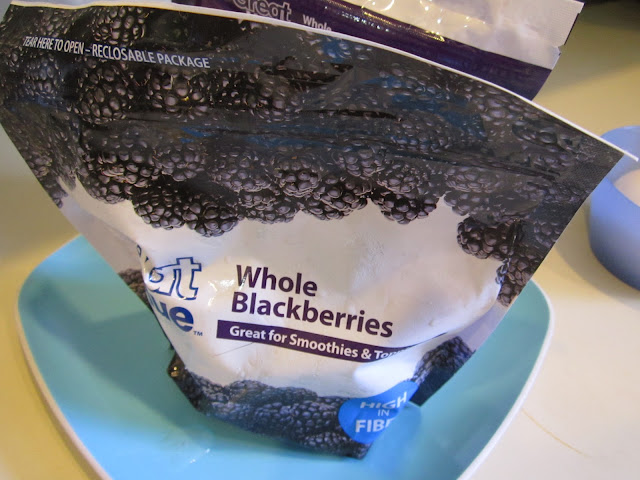 Ahhhh, those Brits.
"Pudding" refers to any dessert, but let me assure you,
this is not just any dessert.
This is a wonderful, sweet, cake and fruit concoction that's tangy, sticky, gooey,
and deceptively easy.
We decided to preview it as the star of Savannah's
18th Birthday Buffet. 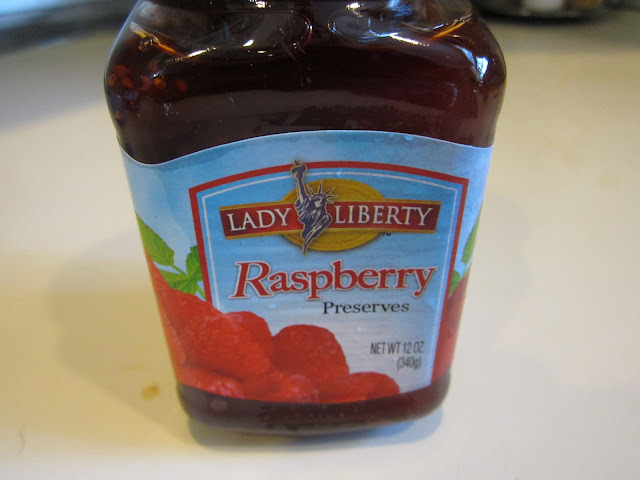 My children like cake, don't get me wrong, but the Minions are extremely adventurous
foodies willing to veer off the beaten path.
If you've ever wanted something versatile you could whip quickly,
this is your recipe.
I don't think I'll ever even need to look it up again;
yeah, it's that easy.
Now preheat the oven for 350 degrees.
That's Fahrenheit.
I can't do Celsius.
I've never baked in England.
Go ahead and grease a 9x13 baking pan with cooking spray.
Again, this is in inches.
I think meters would be stupid huge, right?
Who can eat that much? 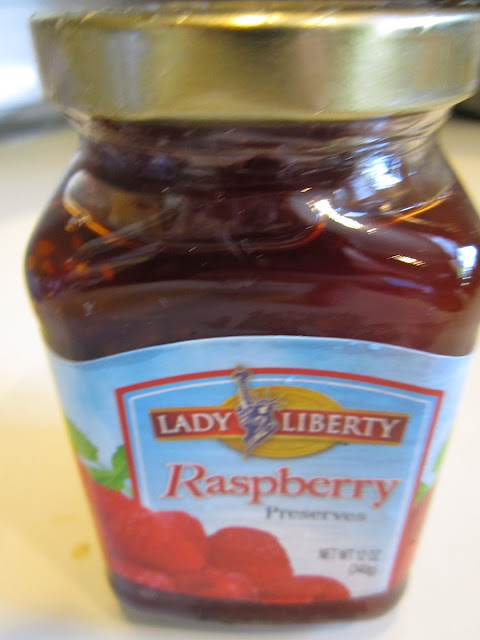 Ahem.
You'll need 6 cups of fresh or frozen berries;
we used blackberries for this, but I think peaches, plums, pears, blueberries,
or just about any bakable fruit will do.
You'll also want 12 ounces of a jam that will blend with the fruit,
and what says summer like blackberries and raspberries?
I mean seriously....YUM! 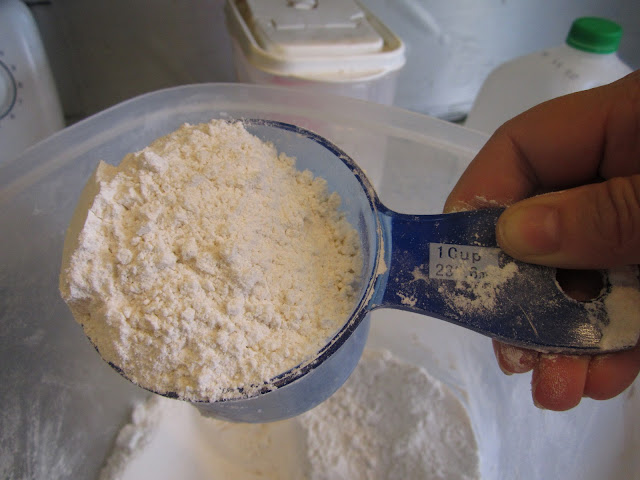 Two cups of all purpose or self rising flour.
Frequent baker's tip: keep a measuring implement in your ingredient bin.
I use a half cup measure in here, which works for almost every recipe,
alleviating the need to mess up a measuring cup. 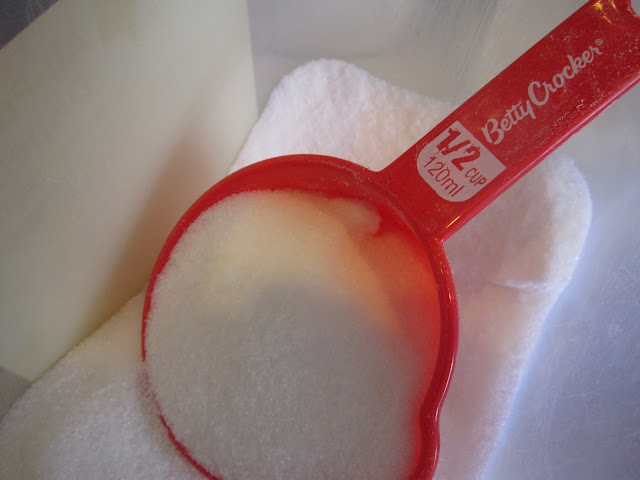 Two and a half cups of sugar. 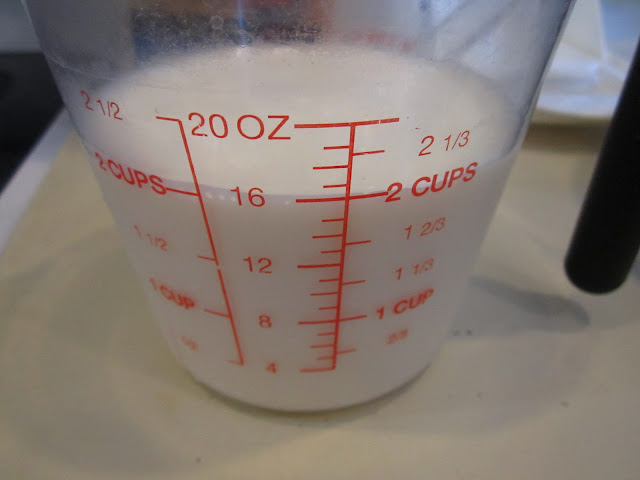 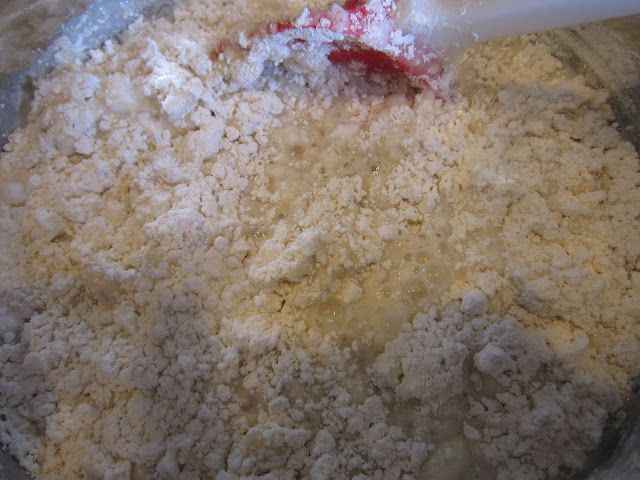 Dump those three things unceremoniously into a bowl.
Leave the $300 stand mixer on the shelf, babies. 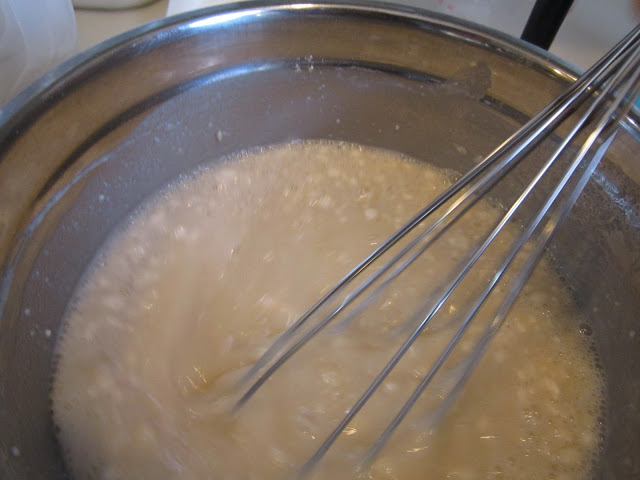 Whisk it until blended. 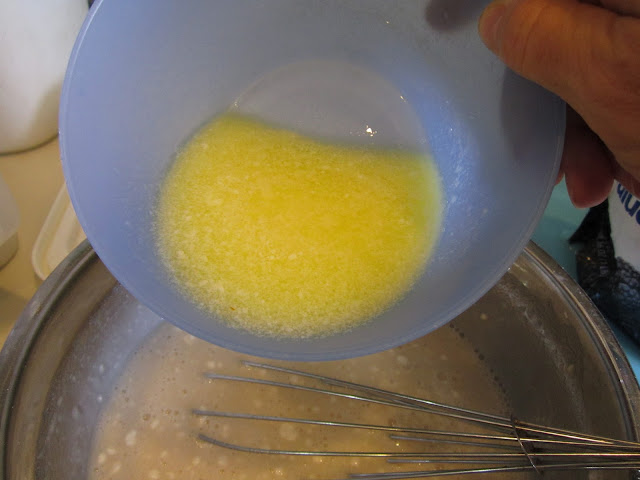 Microwave one stick of butter (half a cup) until it's melted
and slowly pour it in, whisking constantly. 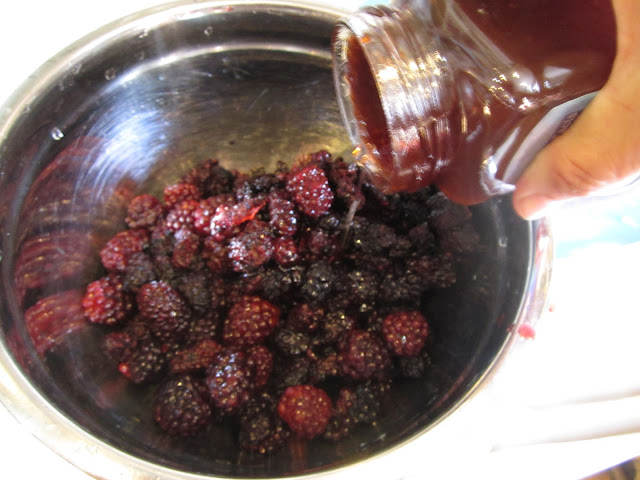 Rinse the berries and drain them well, then glop the jam in.
Yes, glop.
It's jam.
It doesn't pour or anything.
It comes out in roughly it's original form with a SCHWUMP sound.
Yeah, you know it. 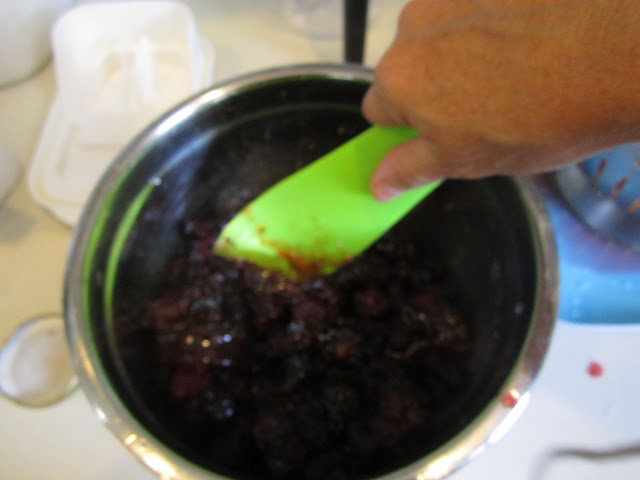 Mix it up gently with a rubber spatula.
This is crucial.
If you use anything else, there will be a small explosion, followed by a break in the time/space continuum that will destroy this universe and all parallel universes,
including the one that features a version of you on the cover of This Old House
with Martha Stewart.
And we don't want THAT to happen now, do we???

God, I need to lay off the diet green tea and late night sci fi on cable. 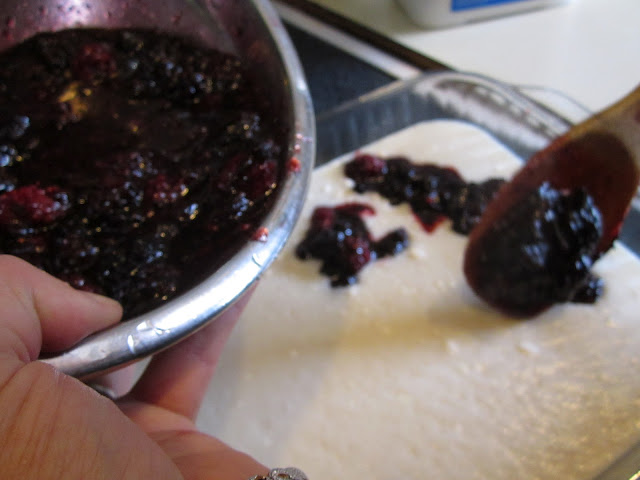 Pour the batter into the baking dish,
then spoon the fruit over it. 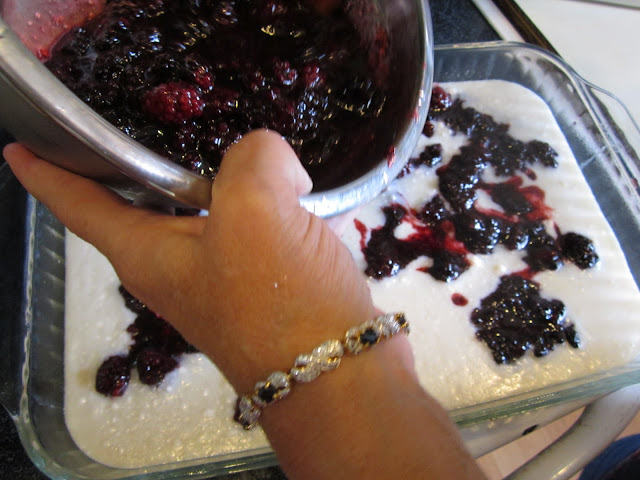 It's going to sink into the batter.
You actually want this. 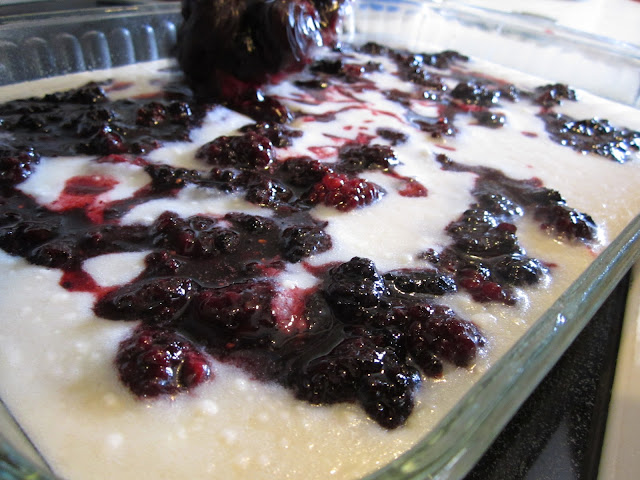 Remember, it needs to bake first.
Do not eat it. 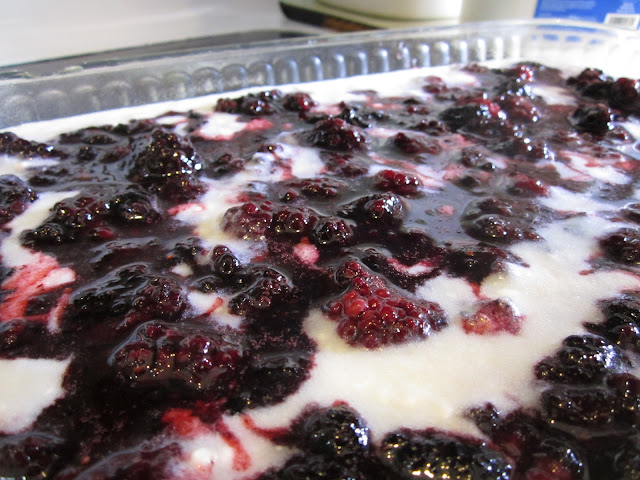 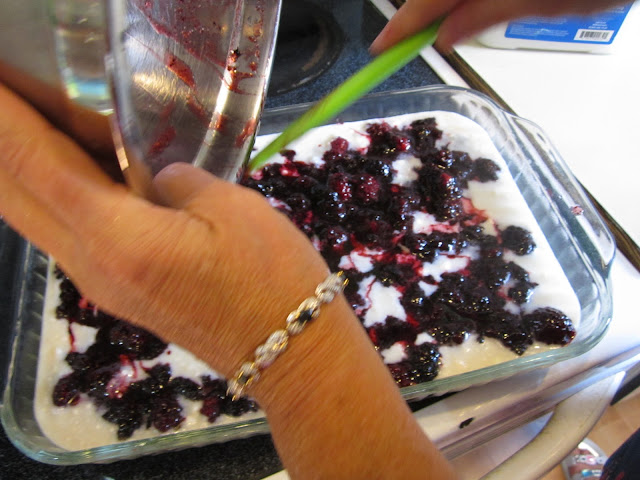 Scrape out the last of it.
Pretend this is not a gratuitous bracelet shot. 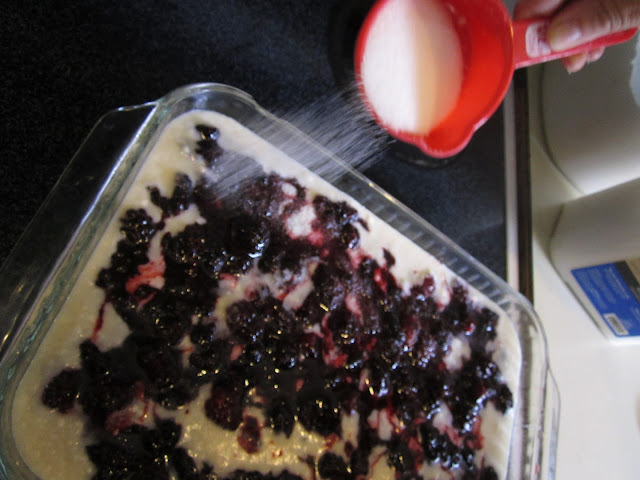 Sprinkle a fine dusting of sugar over the top. 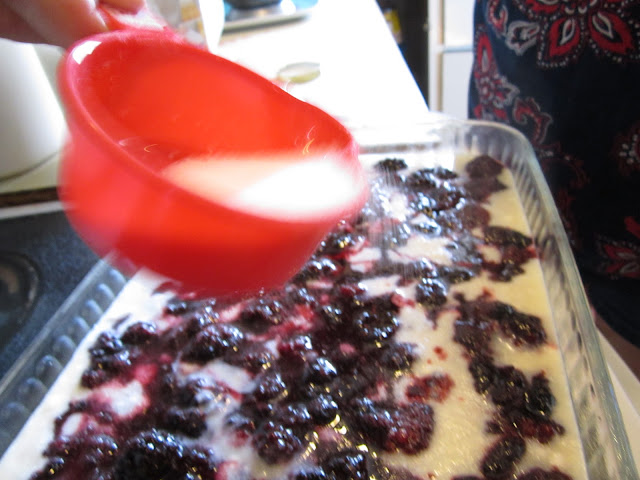 This will crisp up and give you a nice, crunchy finish. 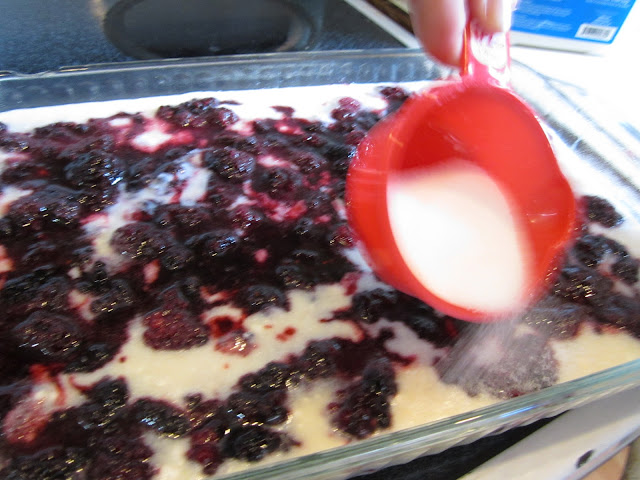 I suspect this recipe was written by an evil dentist. 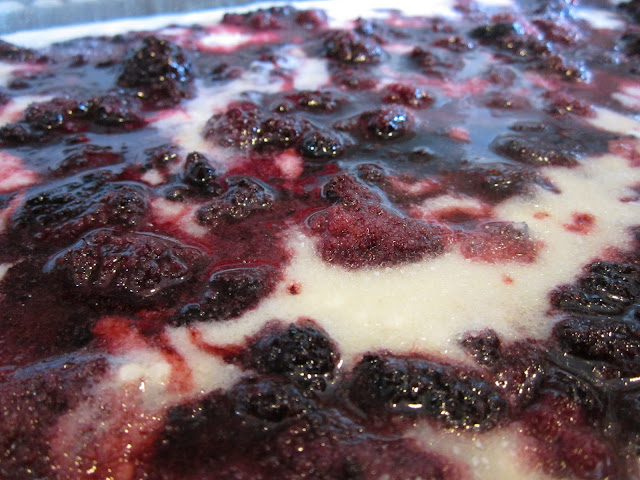 Allow your imagination to take you into the future. 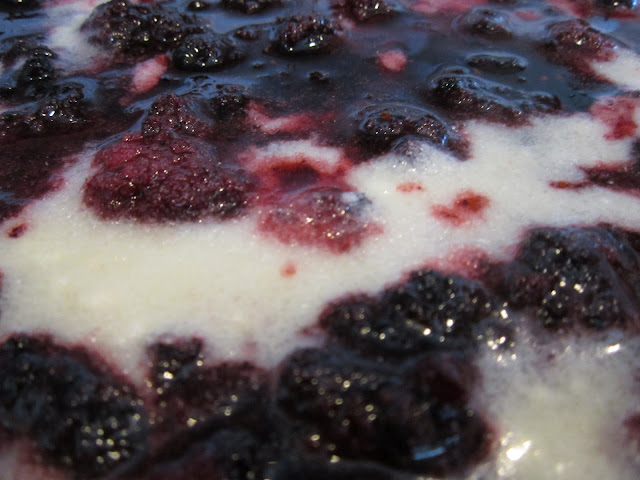 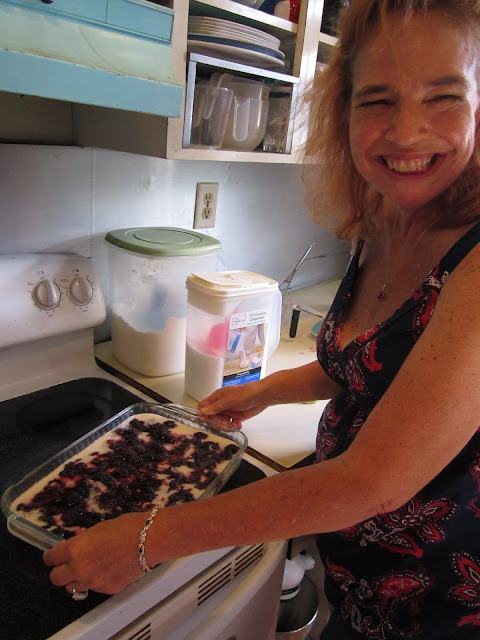 Have a bad picture taken of yourself in which you simultaneously look drunk and pregnant,
neither of which is possible, as well as vaguely like a beaver, and pop it in the oven. 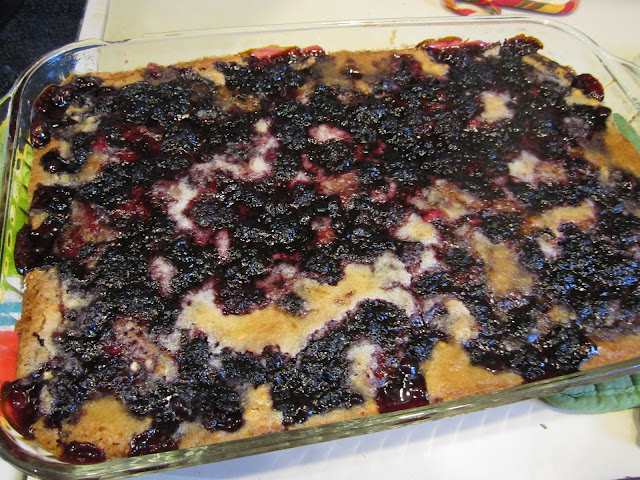 Bake for one hour until brown and bubbly.
I think that was a metric hour;
I actually had this in the oven for an hour and a half. 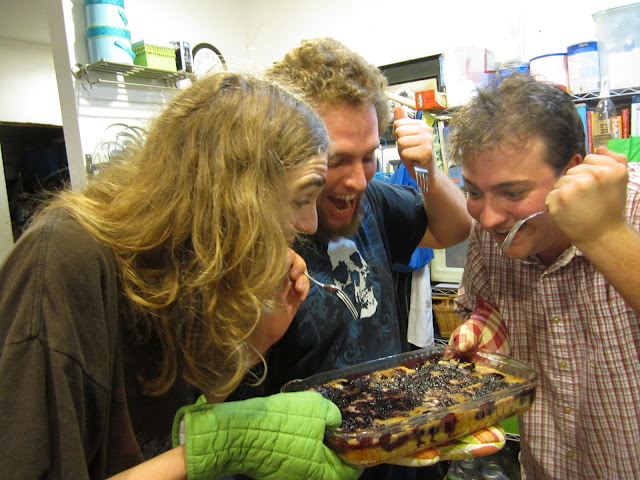 Enlist a little help in getting it out of the oven so you don't strain
your frail self.
Frail because you were stampeded over when you uttered the fateful words,
"It looks like it's finally done!" 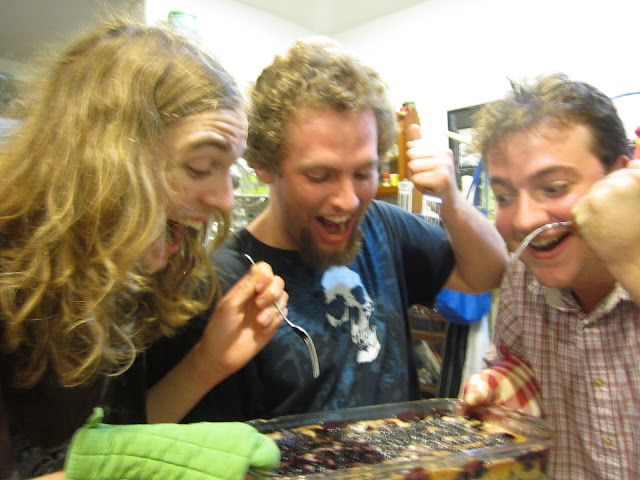 See if you can find ANYONE willing to try it. 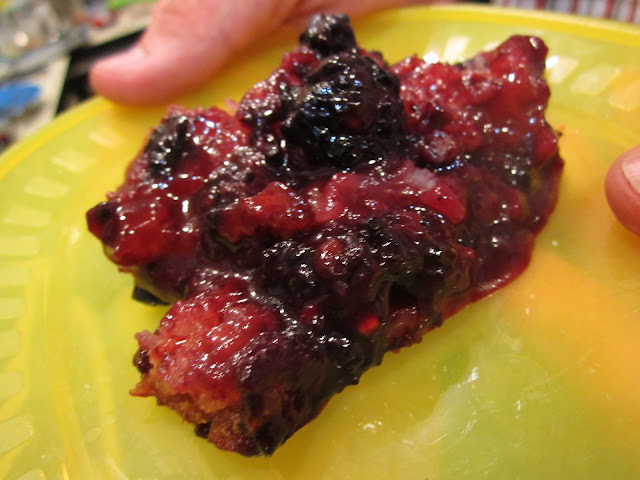 The fruit just oozes into the cake, making it a tangy bursting treat
with tons of fresh taste that required almost no effort.
I've opened boxed mixes that were harder to make.
Saturday, this will follow high tea with a lightly sweetened whipped vanilla cream.
Why lightly sweetened?
I'm running out of sugar.
Posted by Life in Rehab at 9:14 AM

Yummmm! That is one fabulous birthday cake! Thanks for not using British measurements....I haven't been able to find my conversion chart forever! Love the bracelet by the way. You are fabulous! Oh...and I pinned this to make later!

That looks easier than any cake I have ever met! Also, please do not cut back on the green tea and sci fi, if it's going to make you less hilarious.