The Home Office, Phase One 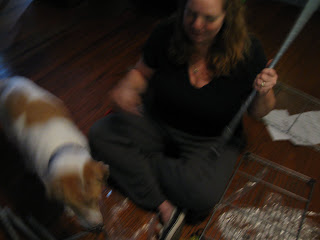 For the office redo, the whole family got in on the act. Arwen helped me put together the metal shelves that cap the desk for extra storage. She's not good with a screwdriver, but she can sort parts pretty well. And she crawls into my lap when she thinks I need a break. 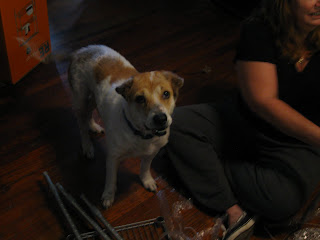 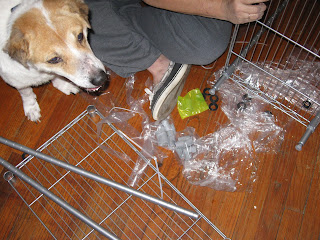 The men in my family disassembled the old desk and Savannah put the new $20 VIKA AMON desktop on the old legs. She also reattached the cord trough, another fine IKEA product. 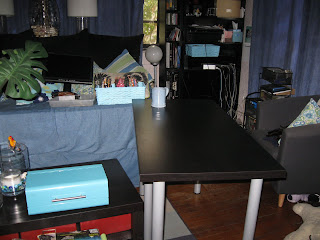 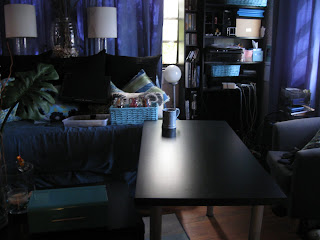 The hubster dove in to see what cords were actually still attached to what. Since the desk used to sit against the bookcase, the cords were hidden, and so out-of-sight-out-of-mind. Now it was obvious that some geek-tweaking needed to be done. 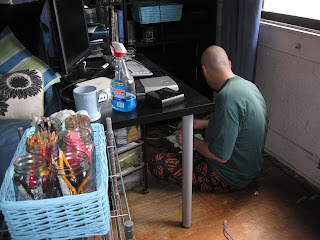 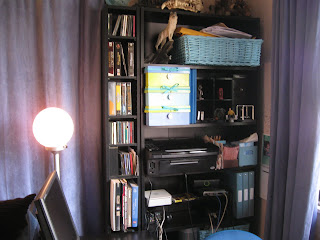 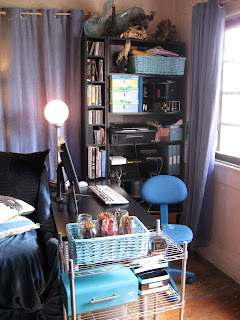 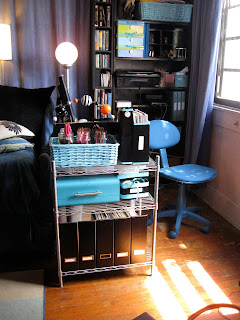 I like the binders with my project ideas nearby, and magazines to get ideas from in rotation on the metal shelves.At the end of the day, we were
at least at a stopping point and settled. There's more to come, but the space is more unified and serene. The desk is now against the daybed so that I face the room while I'm working. Since we often hang out in here to read or listen to music, that's important. One of Arwen's beds is near my chair; she likes to nap where ever I am.

Totally Cool Receipt:
New Desktop: $20 from IKEA
Chrome Shelves: $16.94 at Target
Turquoise Breadbox (pictured on the chrome shelves): $4 on a Target clearance endcap
Binders: $2 each at Walmart
Desk chair: $10 clearance at Target
The baskets were all just given a new coat of paint. I'll concede $3
Additional organizers and files: FREE
A coordinated and organized office for $59.94? That's in the budget!
Phase Two is in the planning stages.
Posted by Life in Rehab at 8:09 PM

That is groovy as can be. None more groovy. I dig it.

This is a BAD post! You have done so well you are MOTIVATING ME to do some actual cleaning and organizing. I had hoped to goof off, read blogs, listen to the rain... and now you are making me THINK about putting things in their appropriate place.
Why did I choose to come here early in the day? No excuse to not begin.

Oh, that turquoise breadbox is calling my name, it's a perfect pop of color ! What a cozy corner you've carved out just for you! Thanks for linking up to the party, it's so great getting to see where we all spend time online.
xo
Kate

ahh- so nice to have your own spot to blog. Love the Ikea table.

I came the round-about way to visit you today...from your Mom Cave post. (-: What a great space you made for yourself: super organized with everything at hand and very functional. Good job! Good luck with the contest.(-:

What a great space! Visiting from Susan's mom-cave contest.

I love your little sorter/helper.

can you balance my budget?! Great job!

Wonderful..... I want one like this... for crafting and blogging as well... I am in search of ideas for that purpose... Hope it will work..
I would love if you peek a little to my space at

and let me know about it
Love
Farah