Guest Blogger: How to Build a Deck Over a Patio Part 1

You know how every once in a while, blog buddies get up the courage to actually meet?

My best virtual friend, Michael Reilly, and I finally got to hug in April 2009 after 9 years of online chatting. And we dragged our families into it too! We did a vacation in the together, and then repeated our shenanigans with a surprise birthday trip for his wife Carolyn in August.

Michael is the primary caregiver for his family, the maker of fine wines, and a real hardware guy. He’s talked me through a toilet installation over the phone. And I’m pleased to announce that the Reillys are flying down this weekend for Sammy’s graduation!

I have an ulterior motive for this: my buddy is a serious craftsman. I’d like his opinion on which direction to take with a few of the upcoming projects.

To show you just how good he is, Michael has agreed to be my guest blogger and show off the project he just finished a couple of days ago. He designed and built this in 4 days around his work schedule with the help of his two handsome young sons (hi boys!) and basic power tools. So many of us in the blogosphere are doing backyard updates, I thought this would be timely.

Oh yes, I will be trying this!

So without further ado, here’s Michael Reilly of Sylvan Run Wines with a deck anyone can build!

I Want My Patio to be a Deck!

...and finally, 26 years later, I decided to make it happen. Our house came with a very nice concrete slab patio, which we think was originally intended as a base for a garage or workshop judging by its size. Over the years some cracking occurred, and even after patching and painting it still looked out of place. Especially after the Johns Hopkins Memorial Sunroom was added in 2007. Sandwiched between the massive playground structure, the 16 ft pressure treated flower box and the sunroom's two pressure treated landings, concrete just seemed.... well.... wrong. 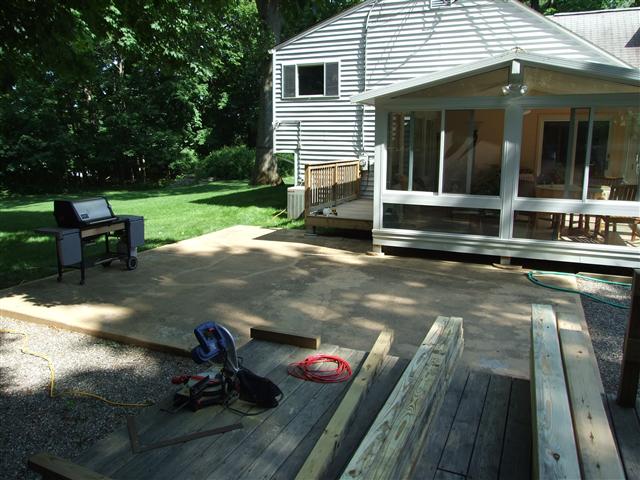 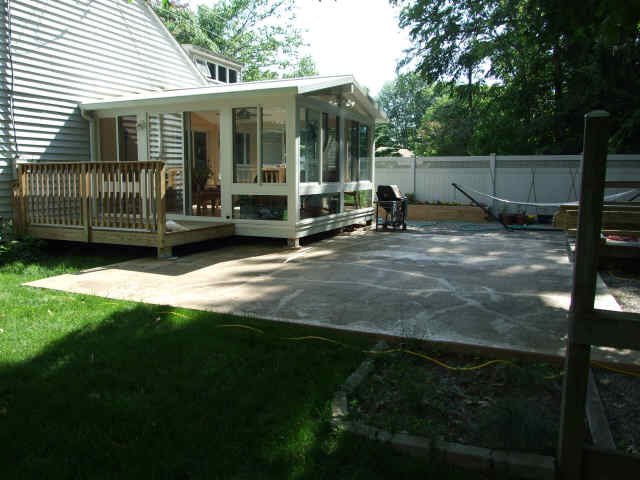 So to start things off, the step to the BBQ landing (My Weber usually sits in the back there against the house) was removed and the idea for a flower box to match the one in the background by the gray fence emerged. The box needed to be constructed before laying out any joists. 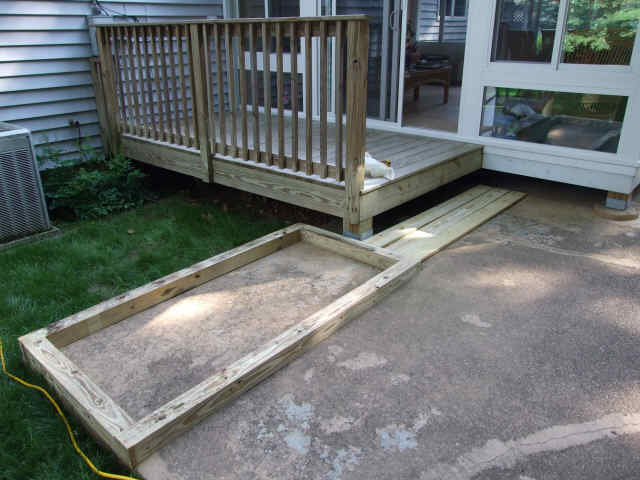 I sized the box so it sits flush with the corner of the patio and it overlaps the new step which will be topped with three deck boards instead of a single 2x8. Pressure treated 4x4s are awesome to work with if you have the right tools. Surprisingly, all you need is a good saw and a decent drill.... and these amazing screws. 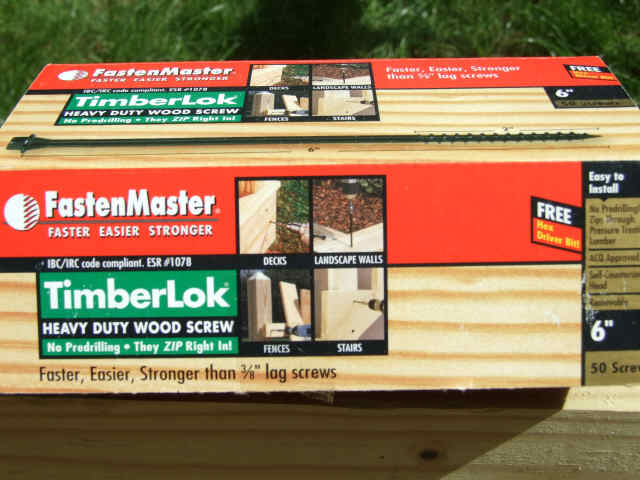 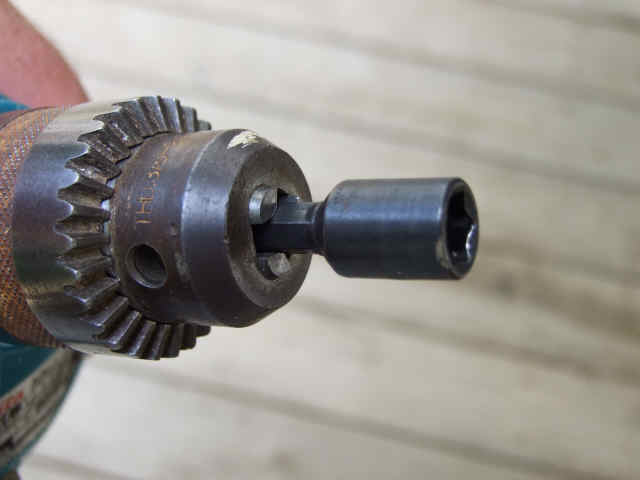 The screws come with their own hex driver included free.

Though they say you don't need to pilot drill, I'm old-school and do it anyway. Trust me, it makes driving that 6" screw with the 3 1/2" shaft sooooo much easier. 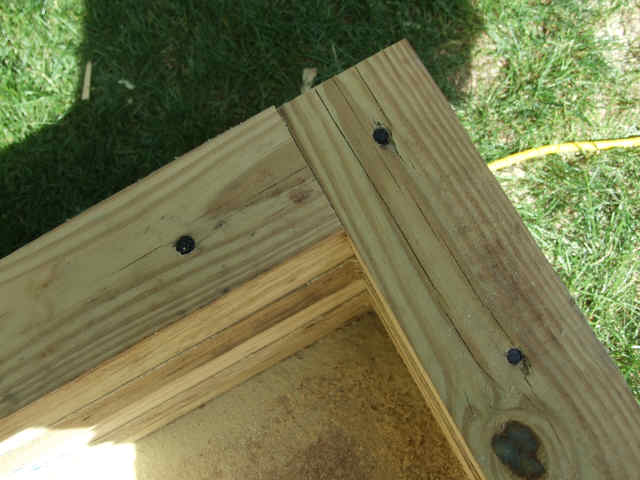 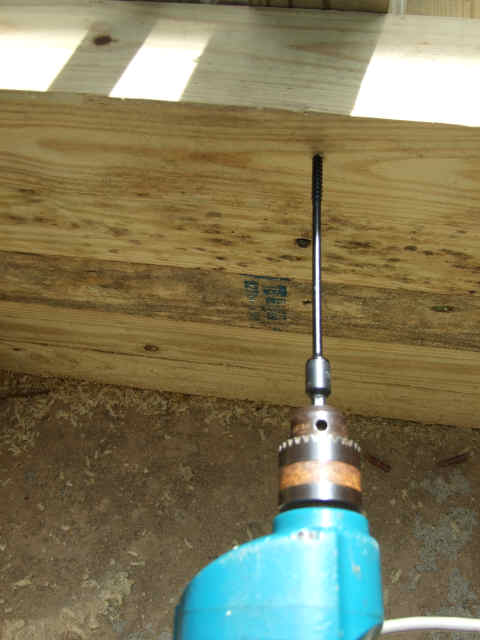 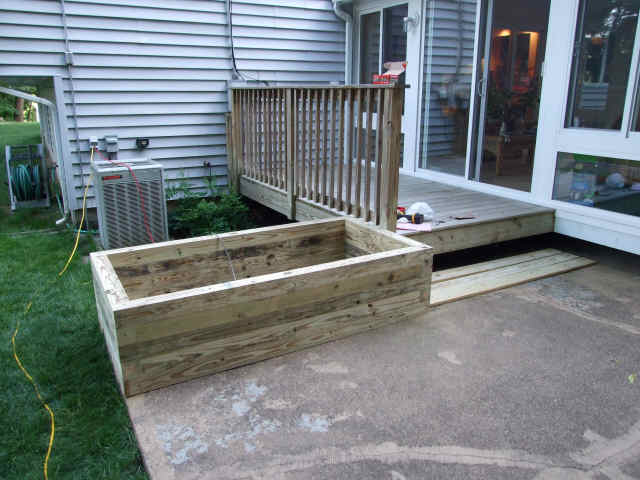 Eventually the box will get lined with some gravel and weedblocking cloth before getting filled with topsoil, but for right now, we have a deck to build! 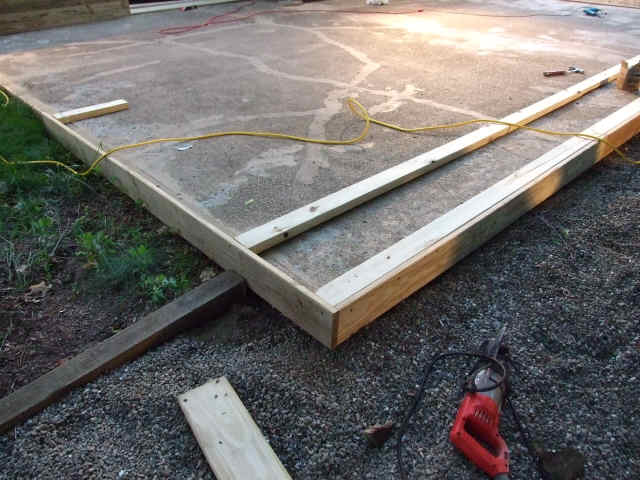 I put a skirt around the edge for two reasons. The stringers (2x4s laid flat to keep the deck low) need something to tie into and I really want ALL of the patio to disappear. The stringers are laid out 16" on center just like always. 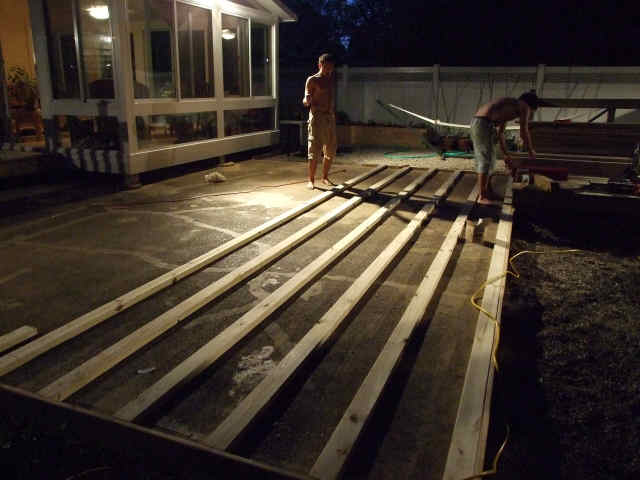 ...And as we worked into the night, my vision started to take shape :-)

Oh exciting! I wonder if this is something we could do with our cracked-and-falling-apart patio? Hmmmm...

I did kinda have you in mind, Chelsea!