Let me start by saying there has never been a store bought costume in this house. And we have done everything from Barnie the Dinosaur in prison garb being led by an executioner (I was REALLY pregnant, and purple is a good color on me), Chinese New Year dragons, demons, trolls, princesses, knights, The Joker, and even Lord of the Rings elves for last year's Christmas portrait ("Merry Christmas from a Slightly Different Workshop"). As they got older, the Minions started chiming in on design and ideas.
My daughter, Savannah, and her friends make elaborate costumes for different occasions, like Anime' Cons and parties. These are original designs; they make their own patterns, dream up accessories, and even style wigs. Right now, they're all working on Alice in Wonderland for a competition. My little creative genius is the White Rabbit. I thought this might inspire some of you moms who already know Halloween is not far off.
Hey, she's not in a pool hall, right?

And so Vannah initiates take over of blog-land!
This project is for a costume of mine I was doing; an original design of The White Rabbit from Alice in Wonderland. And of course, I needed an over-sized clock/pocket watch! But where can one find a giant gold clock? The proper question is where can one find an old clock and a can of gold spray paint. 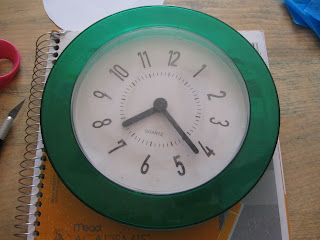 First we take our old clock. This one happens to be green, no longer 'fits' in the room it used to be in, has been sitting in a corner for months, and has no more real purpose. Now, mom's suggestion was to just tape up the glass (plastic) front and spray. Instead: 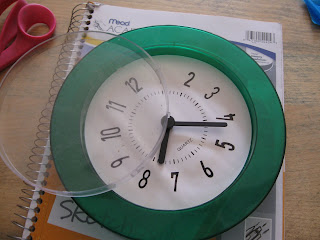 I found the little things on the back that hold on the plastic face and took it right off! Now I can make a completely new clock face and redo the numbers and hands to look more Alice in Wonderland-like. 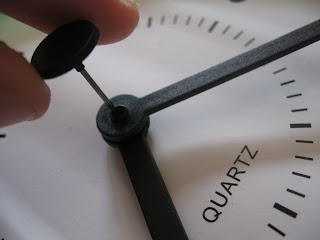 First I took off the hands and the little thing that holds the hands on. This was a really cheap clock so the hands and stuff just came up when I pulled. 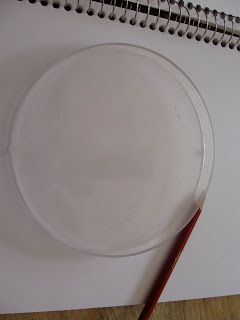 Next, trace the plastic thing to get a circle that's the size of the clock face. This will later be used as a new clock face with all new numbers. 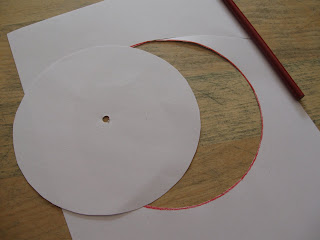 Of course let's not forget to cut it out. 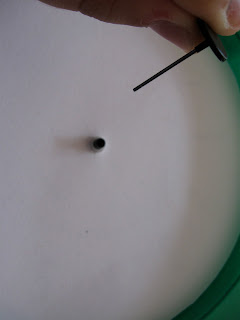 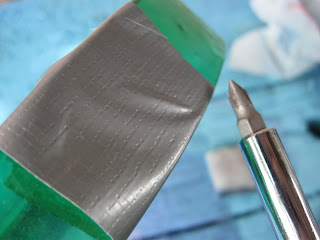 Now, since this is going to hang around my neck like a giant Flava-Flav clock, I need a hole to feed chain through. So get out your duct tape, handy dandy power drill, and the sharpest drill head you can find. Put duct tape over the area you're going to drill into, and start drilling. It might take a while to get some progress on drilling into the plastic, but have patience. And don't be afraid to put pressure on the drill, but not too much so you crack the clock (if you're using a cheap plastic one like I am)!
(Mom Note: she did not use the screwdriver head. She forgot to get a shot of the bit when she changed them out.) 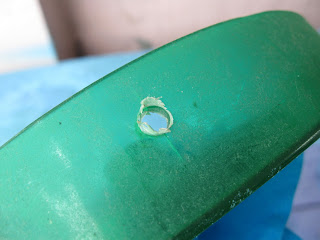 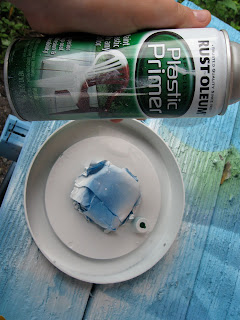 Now tape up the little mechanism on the back and start priming! I believe I did 2 coats of this. 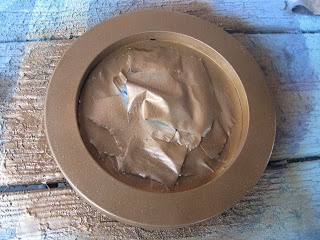 After that, go ahead and get out your tacky metallic gold spray paint!
Now the clock body is pretty much done, but not the whole thing. I added a few more details to things like the hands! 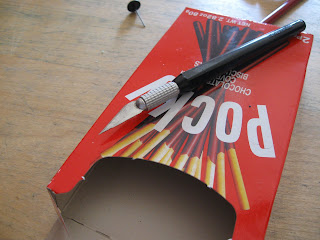 My favorite Japanese snack, Pocky, happens to have some very useful packaging. And since I happen to have a empty box of it lying around, we're going to use it.
Now, I say useful because of the kind of cardboard the box is made of. It's a very thin kind of cardboard (probably like card stock). Since I'm going to be making new covers for the clock hands and these covers will have to slide between/under the two hands, the material has to be rather flat. 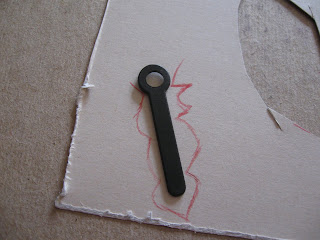 Take the clock hand and trace 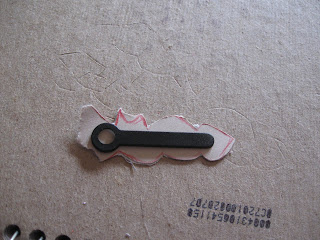 then cut out the new shape. This hand is going to be curvy while the other one is pointy. What can I say? Matching things are kind of weird to me sometimes. Just look at my socks 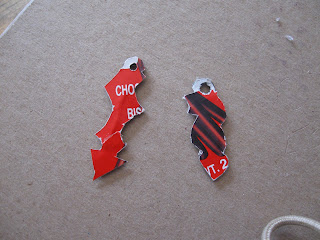 Cut out both new hand faces and carefully cut out the circle at the top with an x-acto knife. Now they can both go to the painting bench! 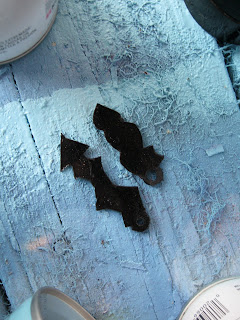 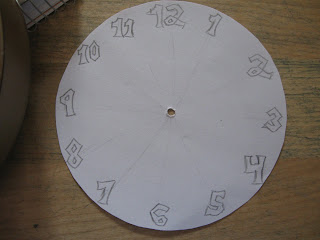 As for the clock face, we do this in easy steps.
First in pencil. 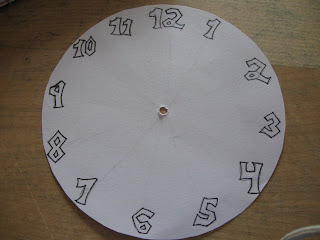 Then inked in Sharpie. 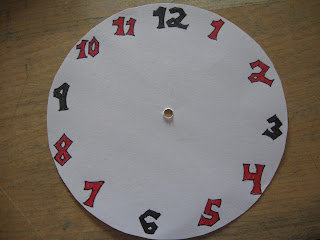 Then finally colored (black and red like playing card colors). 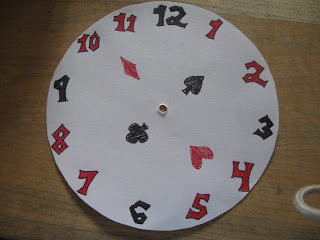 And maybe a little extra flare. Just for the lols. 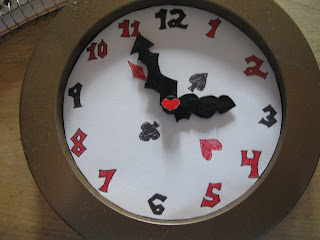 Then we put it all together! (the heart on the hand thing is also cut out of the Pocky box cardboard!) Now just add huge gold chain and enjoy!~ 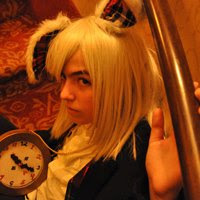 Wanna make one for your little bunneh?
Posted by Life in Rehab at 8:09 AM

What a great post & a fantastic idea, Savannah!!
I smiled through the whole thing cuz my kids love Pocky's too & my daughter never wears matching socks either : )
happy friday

Mle, I find it so funny how alike all of our teens are in their own ways...I get so many emails from moms who thought they had the only children with all-skull wardrobes or high top sneaker obsessions. The nice thing is, everyone has realized it's just creativity peeking out.

And matching socks are over rated.

My kid in her second year of college still does not care about matching socks...too busy. Have a great weekend Sunny! hugs♥olive

BTW, I realized why you're not getting my e-mails. It's got something to do with this.

This is brilliant. I have been stumped at Halloween costumes this year (I usually wear two - one for the office, one a little more fun for parties). I may have to steal this idea!

I can't get the image of a giant Barney on the way to be executed!! I love it!
lifeofperks.blogspot.com

Cleaning company Khamis Mushait
Every woman suffers from the daily cleaning of her home but she may not get the perfect cleanliness she wants. So a cleaning company in the mother of sahk offers my lady the perfect solution to clean your house or villa without bothering you and the desired cleaning. Efficiency, and through our company you can get the floors of a bright and neat house and clean water tanks and walls are very clean while preserving the colors, and also the marble and marble all this and more found in شركة تنظيف شقق بخميس مشيط