The ice box cake was an ingenious mid-century invention of busy women trying to get the hell out of the kitchen fast while still whipping up a great finish to dinner.
There's no baking involved either- big plus in the Summer.
And like our good friend the Trifle, it's limited only by your imagination.
I decided on a decadent combination of strawberries and chocolate.
And we're going to lighten this up a little, so put away the elastic waist pants, it's cool.
Gather the following:
2 large packages of chocolate instant pudding, six 1/2 cup servings each
16 ounces of fat free whipped topping
2 pints of fresh strawberries
A package of graham crackers, 3 sleeves
5 cups of skim milk
1 cup of chocolate chips 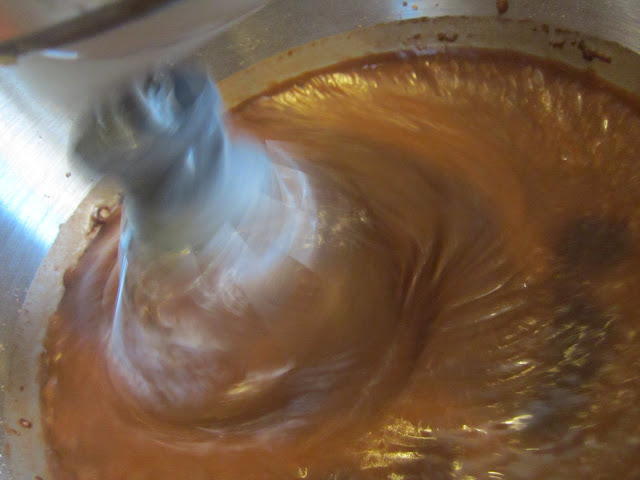 Mix the pudding and the milk.
Note: 5 cups is one cup less than the box demands.
This will give the custard more body and make it stand up to slicing.
Slicing pudding is like herding cats.
Like the action shot? 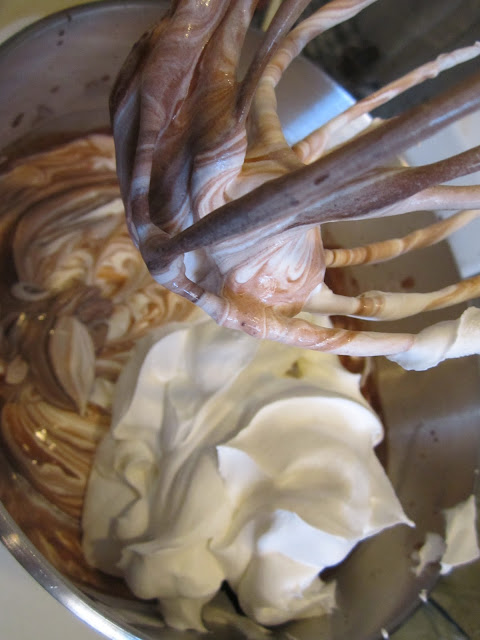 Fold in half of the whipped topping. 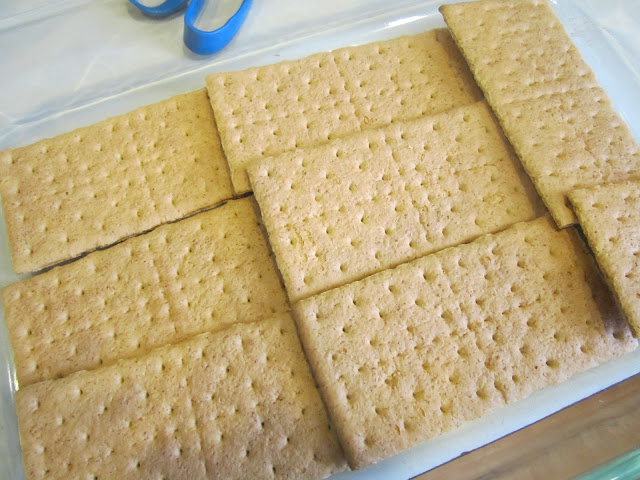 Take a 9x13 baking dish and spread one sleeve of the graham crackers across the bottom.
Break them, do overlaps, whatever; no one is going to ever know.
Not even me.
Unless you want to gossip with me.
Dish, girlfriend, dish! 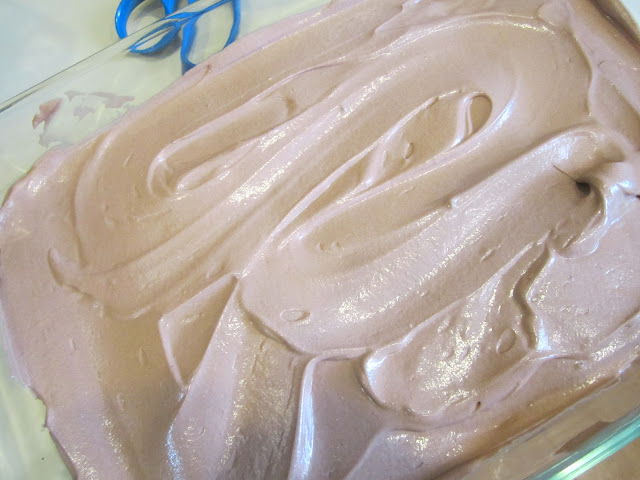 Dollop on 1/2 of the chocolate mixture, then spread it evenly over the crackers.
Stop licking the spatula. That's really kind of gross. 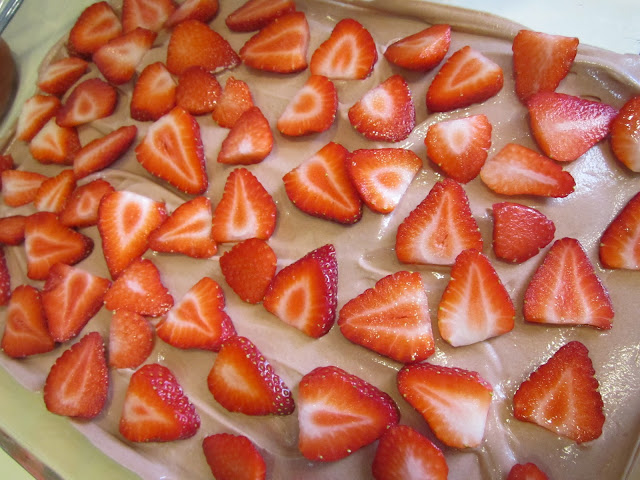 Hull and thinly slice all but about 10 of the berries
and sprinkle 1/2 of them over the chocolate stuff. 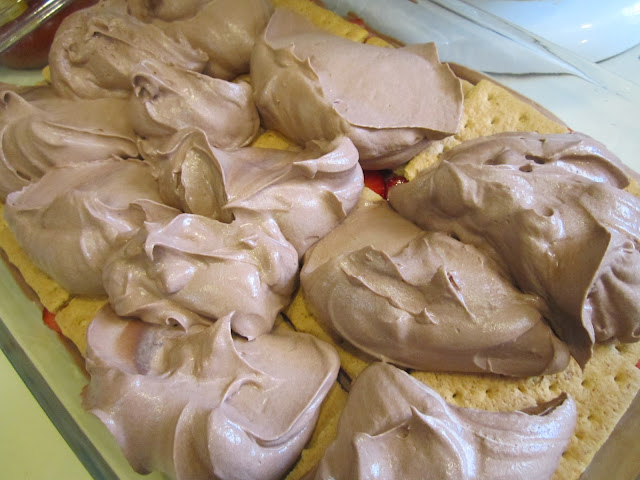 Layer the next 1/3 of the crackers over that, then do the dollop and spread thing again. 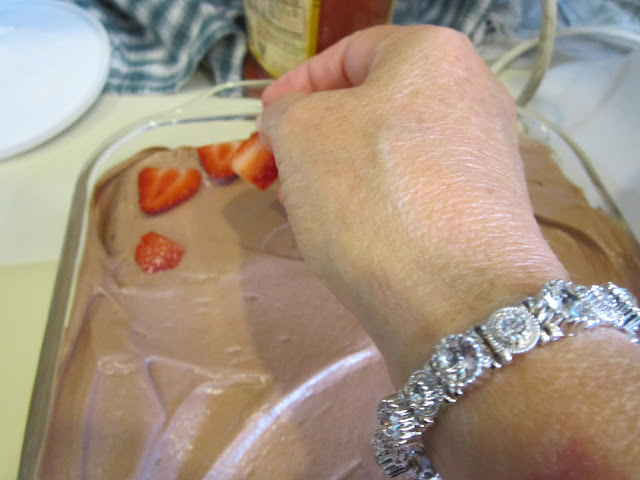 Gratuitously show off your new faux diamond bracelet while you
put the other half of the berries on. 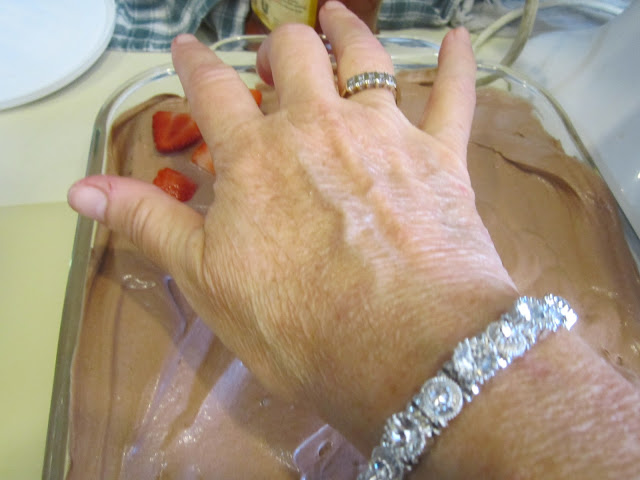 Jared is over rated.
Heeeeeeeeeeee went to Walmart! 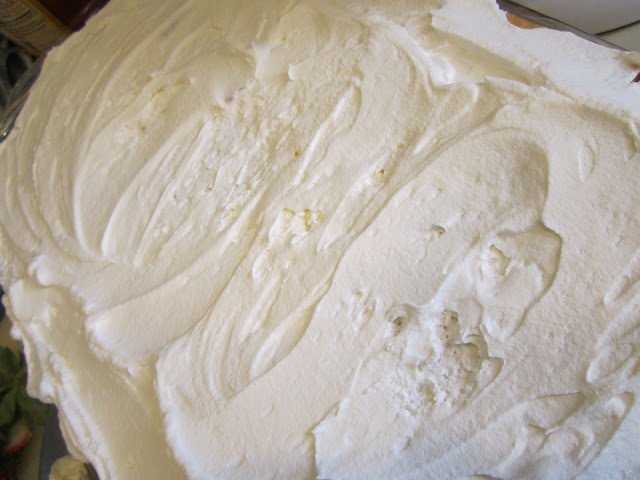 Top with the rest of the crackers and press down firmly,
then spread the remaining whipped topping over them.
At this point, sure, you could stop.
But then you'd have leftover ingredients.
We can't have that! 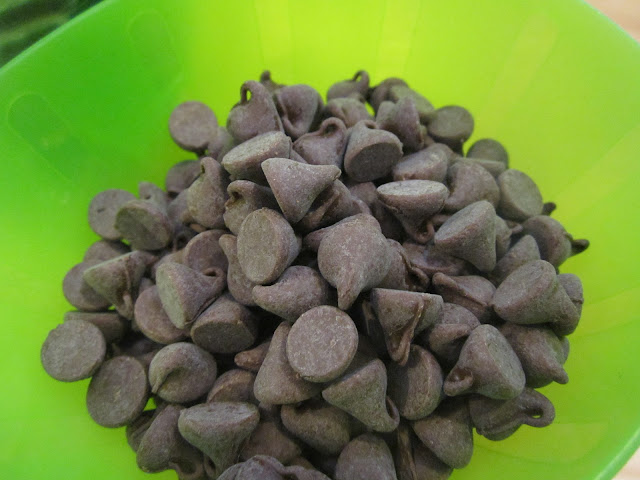 Zap the chocolate chips in the microwave for 45 seconds. They will come out in exactly the same shape. Don't be fooled by their ruse. Stir them with a spoon until they are smooth and melted. Glop them on top of the whipped cream. Drizzle would be better. I just ended up with glop. I figured if I acted casually, you'd think it was intentional. 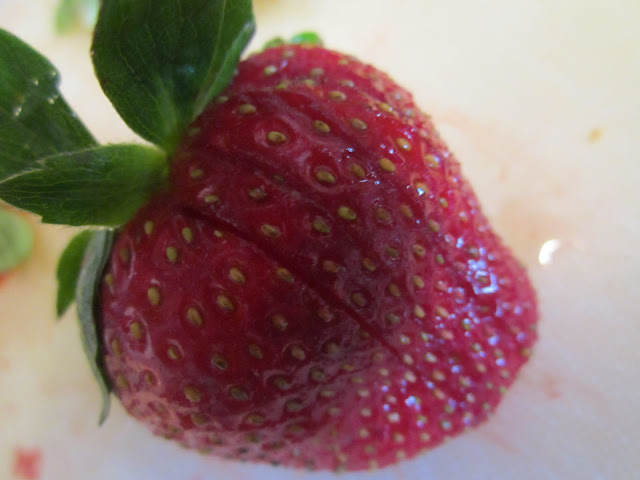 Take the remaining strawberries and make thin slices in them, stopping just under the hull.
That's the leafy part. I think. 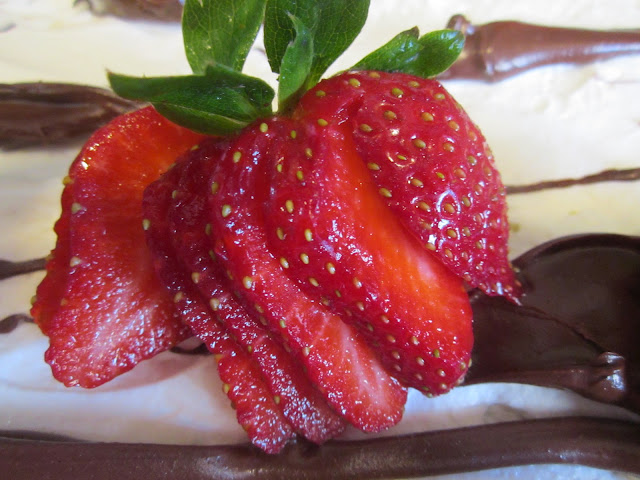 Fan them out. Fancy, huh? 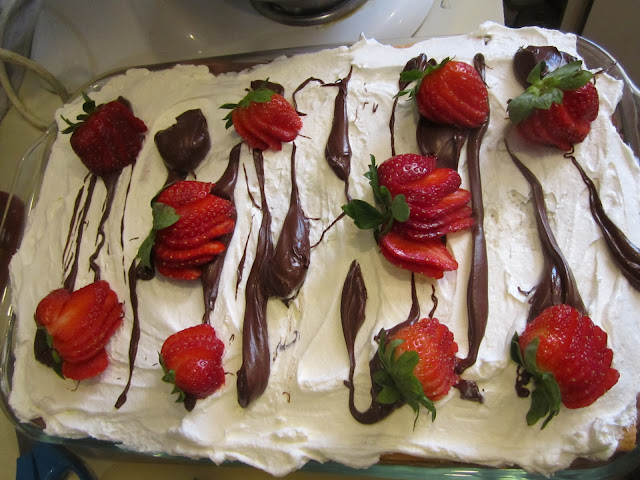 Place them on top of the cake and pop this in the fridge for a few hours.
You can make it the night before in fact. The custard will soften the crackers,
and the whole affair will resemble a torte when you serve it.
I would have shown you how nice it looks when cut and plated,
but evidently mine was mauled by vultures and possums.
The carnage was awful.
But this does serve up nicely enough to hand to Aunt Hortense, who judges everything and alphabetizes your medicine cabinet.
How does it taste?
You're welcome.
Posted by Life in Rehab at 7:13 AM

Chocolate and strawberries! Yummmm. Love the bling! Your's was the first blog I ever followed and you still make me laugh!! Thanks!

I just tried one of these fridge cakes a few weeks ago...it was a big (fat butt) mistake and this one looks just as good and at least has some fruit in it..thanks! Have a great weekend! xo

Great action shot! I would love the security camera footage of the possum attack. This looks yum, must try it!

Mmmm this looks yummy!! Hope you had a very large piece of it :)

"heeeee went to Walmart." That's hilarious. Thanks for the laugh. This reminds me of chocolate pie with graham cracker crust that my mom used to make.

I'm making dinner for my family with my cousin and we decided to do a dessert as well. I dropped off my cookbooks and was looking for a recipe, and naturally your blog was the first place I came (: Making it Wednesday, I'll try to remember to let you know how it comes out!