I'll Get Around to It Ladder 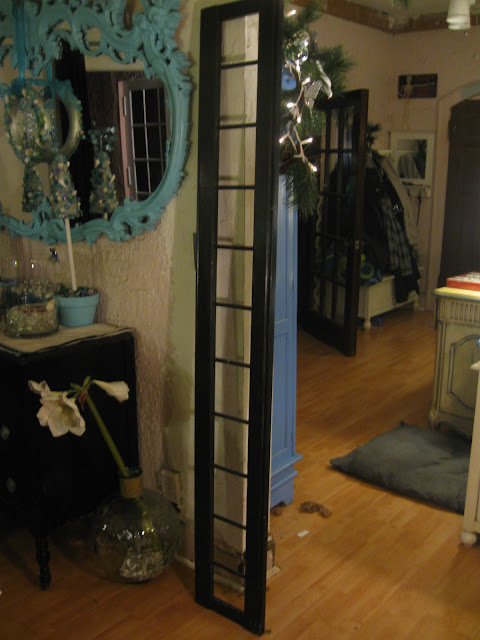 I had this back piece left over from a daybed that fell apart a few months ago, and although I had a vision for it, I never quite got to it. However, you may have noticed there's a little something missing from our fireplace (besides good looks that is)... 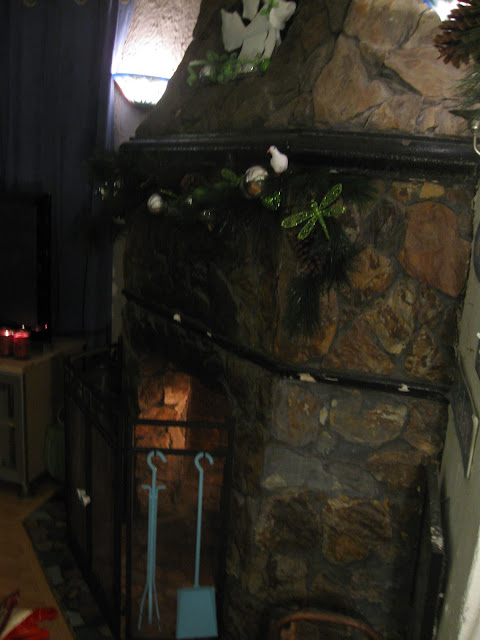 Yep, that baby is mantle-free. So where do we hang our stockings, you may inquire? 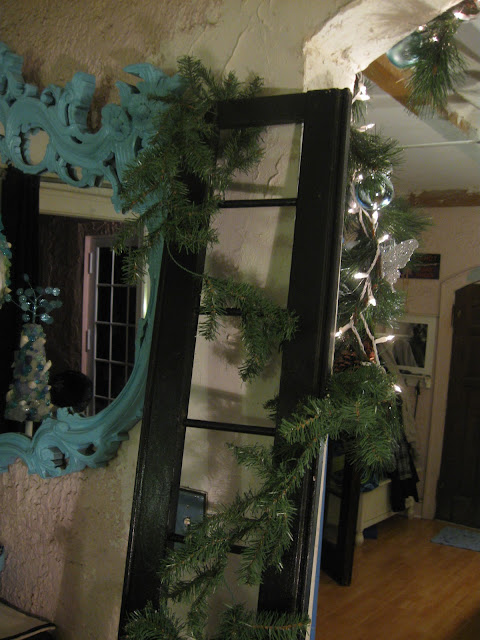 First, let's wind a little garland greenery casually through the rungs of this pseudo-ladder thing. 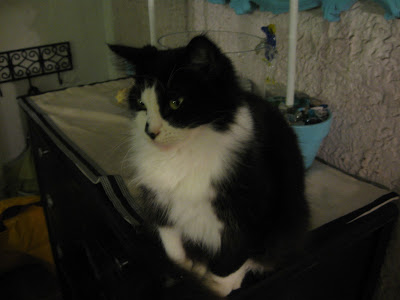 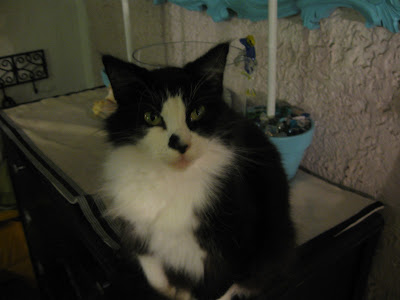 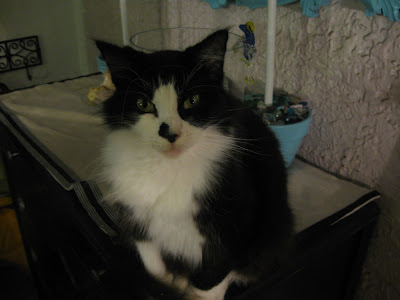 From time to time, seek outside approval on your progress. 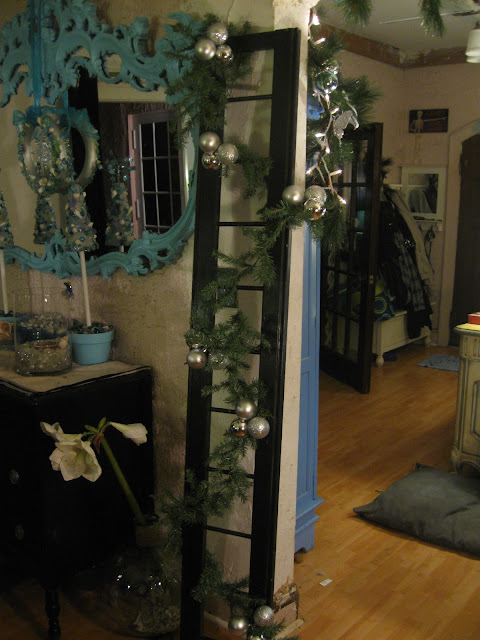 Now let's wire clusters of balls at intervals, just loosely, so we can tweak it later. 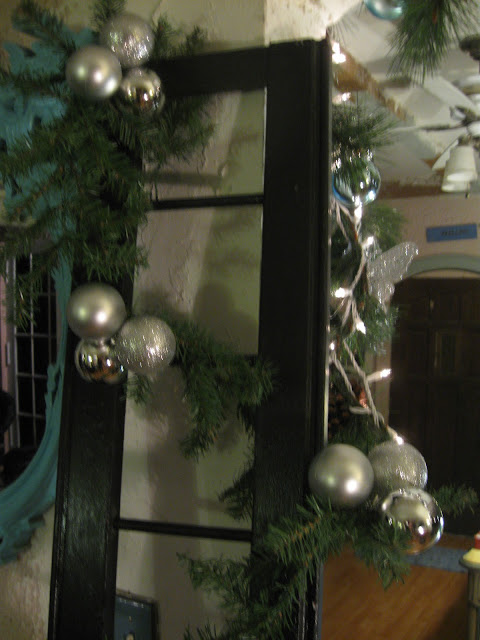 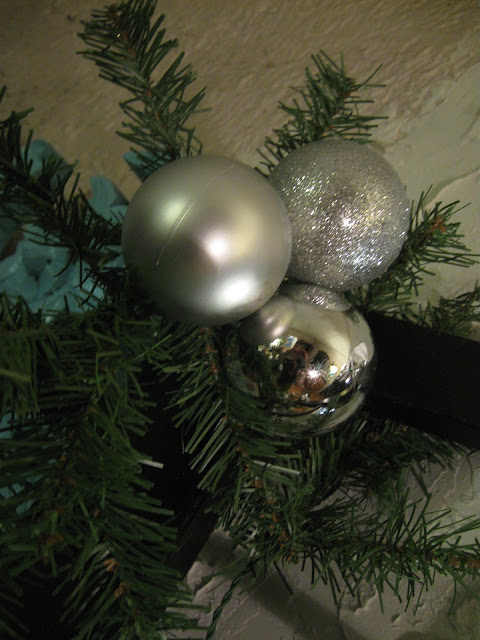 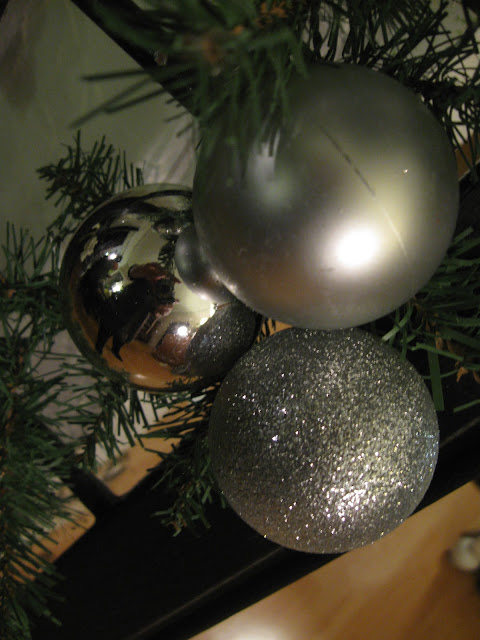 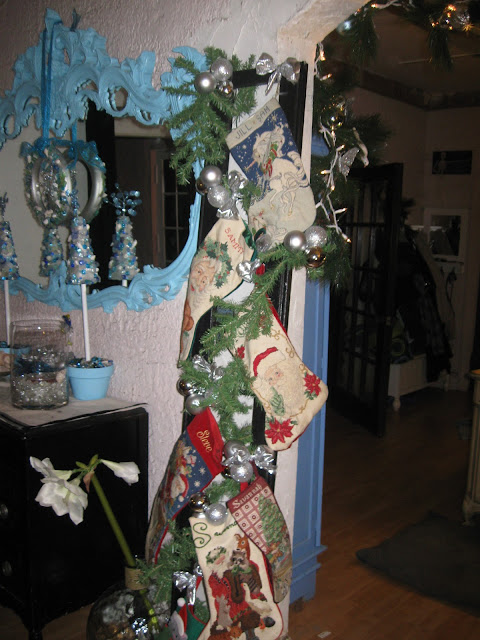 Using wire edged silver ribbon, start tying on your stockings! Amazingly, folks, these were all needlepointed by my mother over the last 22 years as little chubby people appeared in our lives, and they all survived the fire without a singe! 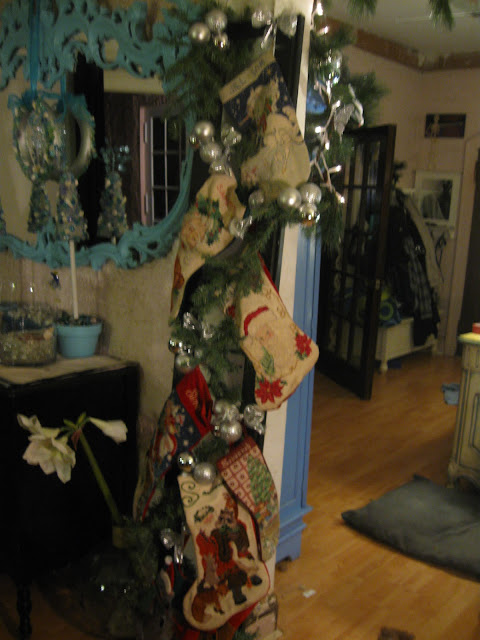 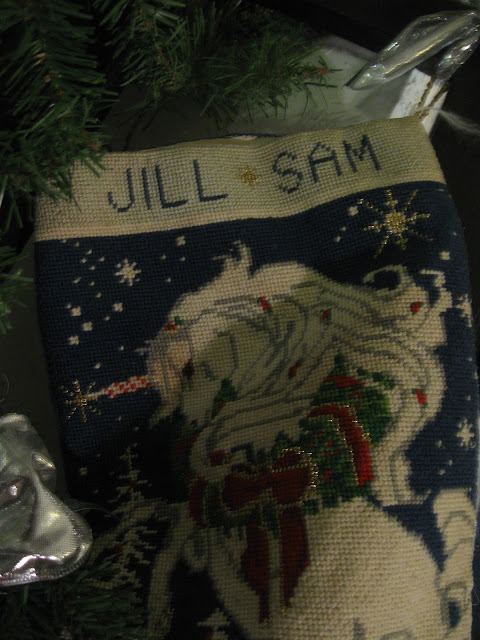 She made this when we were engaged. And yes, my real name is Jill. Mom's the only person on the planet that calls me that. 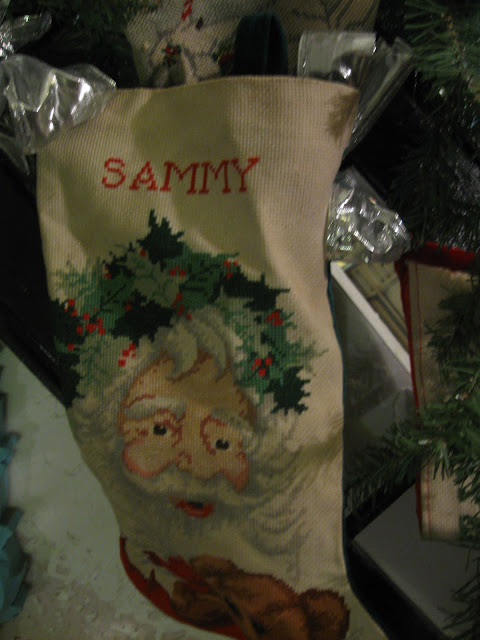 For the family's first grandchild... 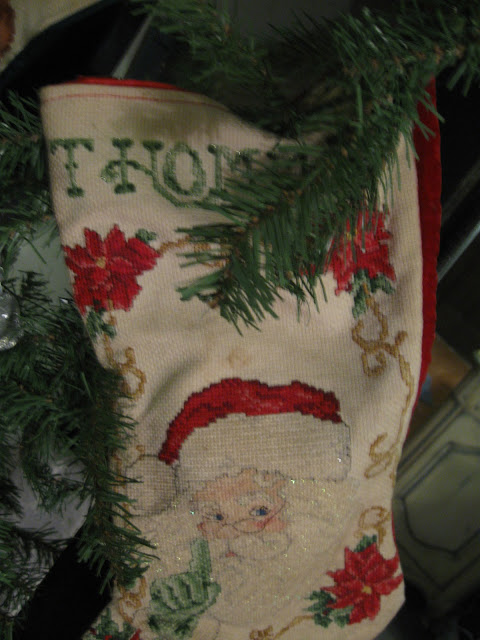 ...and for the roly poly little cherub that followed 21 months later. 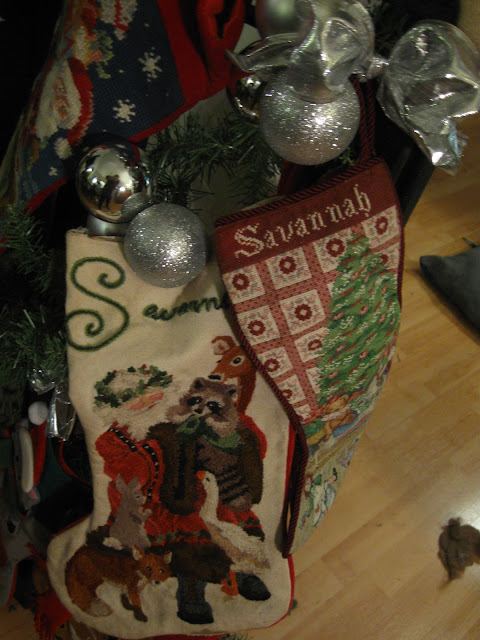 Well sure, she has two; a separate one for jewelry. Duh.
Actually, the tiny one was for her first Christmas, and Grandma made her a larger one to replace it, but I do tuck a little sparkly something in the itsy one for fun. 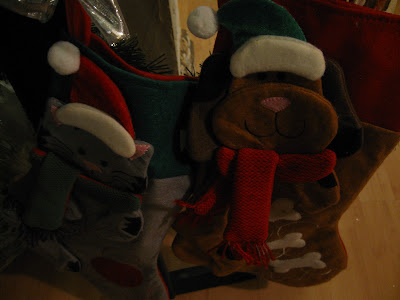 And the spoiled 4 legged things. 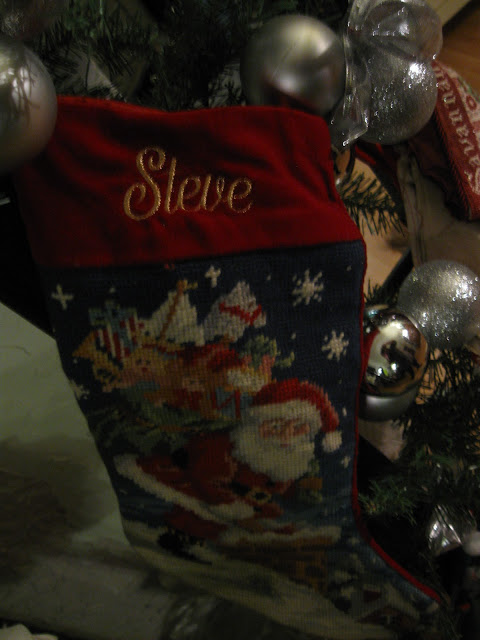 The children's Godfather has one that coordinates, but it's from Lillian Vernon. 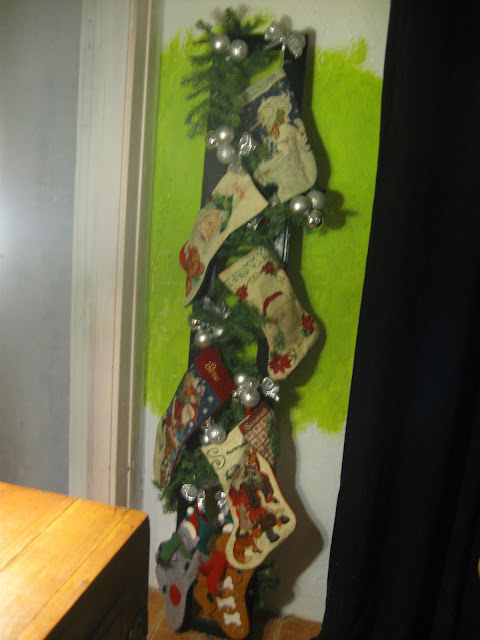 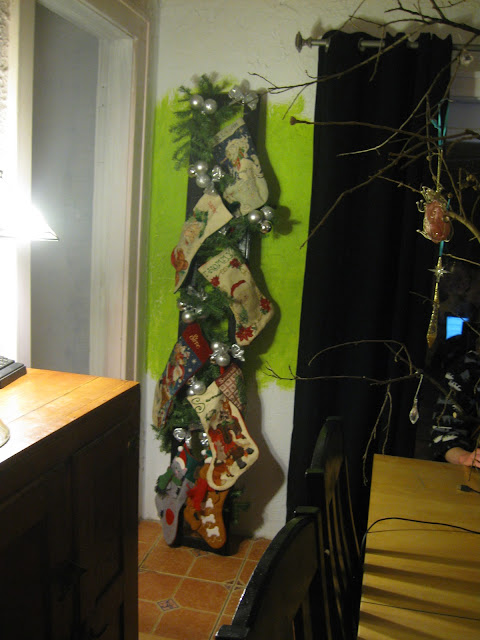 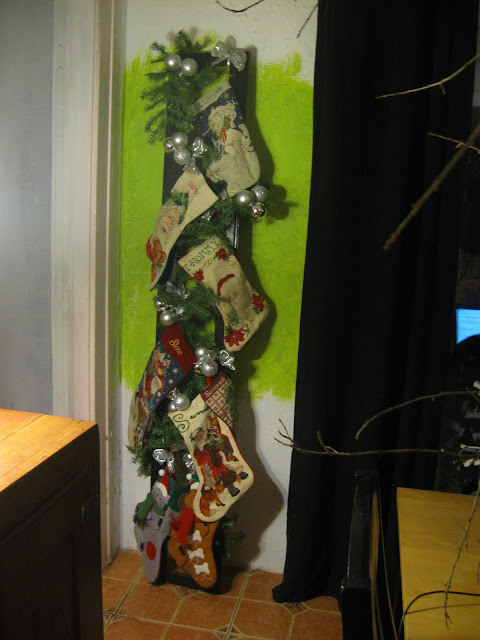 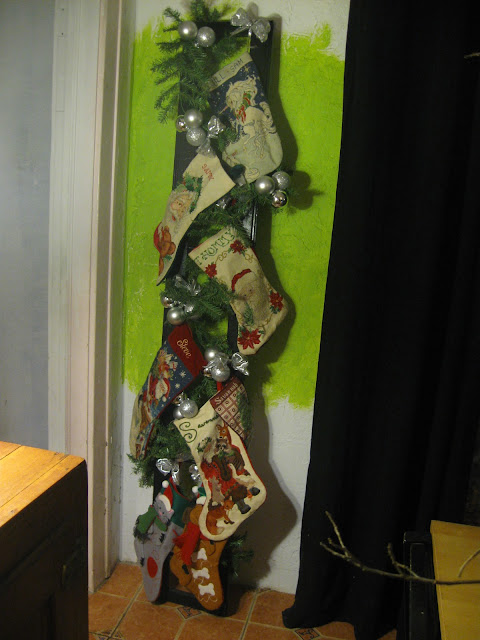 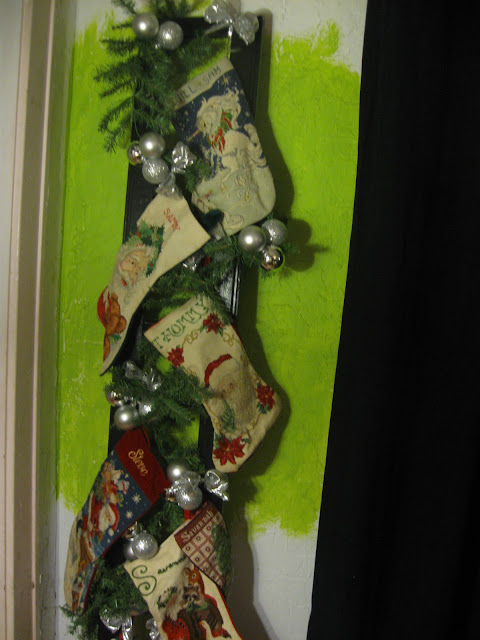 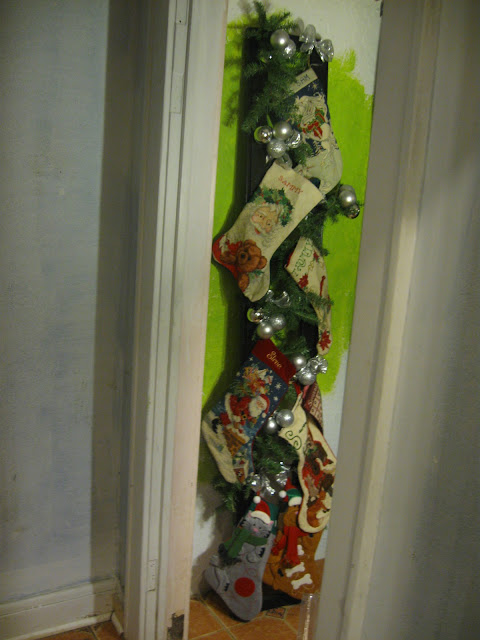 There we go, a stocking display that's also portable, PLUS this year, maybe the Godiva won't be a gourmet puddle in the toe from the heat of the fire. Always a plus, right?
Scroll, there's one more.
Posted by Life in Rehab at 6:39 AM

I want the dragonfly, the mirror, the cat stocking, the cat and a charitable crafty soul to make me my own personalized stocking, thankyouverymuch. ...Jill? ...

How special to have needlepoint stockings from your mother. That's a craft that I've never attempted. Amazing that they survived the fire too. I love how you've used the ladder to display them. Perfect.

Use of the "J" word is strongly discouraged.

Beth@Wiccan Make Some Too said...

Such a great idea Sunny (I promise I will not call you Jill)A ladder, it's too awesome! Your fireplace looks pretty darned cool.I would love to see more photos of it.

That is better than a mantle!!! I love how that looks and so festive and your mom is terrific!

Very creative!! Those stockings are really special, love the little jewelry one..right up my alley!! :)

I am having a BALL on your blog! I just thought you should know I'm hanging out from the ladder amidst the TOTALLY cool stockings!!!

;-D Just ignore me as I wander aimlessly through your world...

Now that's a lot of stockings! The ladder idea is perfect, esp for us mantle free gals :0) I do feel a bit "jipped" with all the awesome mantel decor floating around though

Wow! I love the stockings hanging on the ladder! That's a great idea. Cute and portable, and no holes in the walls... when we rented, we just nailed our stocking into the walls, and may or may not have remember to patch up the holes when it came time to leave... Oops! :x

AND I'm super-impressed that your Mom made all those stockings! She did a great job, and what neat memories they must have for your family!

Your mom is really talented. The stockings are beautiful.

I love the way you display these stockings and especially since your mother made them. What beautiful heirlooms!

PS. one for jewelry??? I LOVE it. I'm taking notes for my own little princess. :)

What a cleaver way to display the socking...and wow! what sockings these are. I do needlepoint and I know what a long time it take to do. These really are gifts of love.

Amazing AMAZING stockings, and fantastic idea for a fantle!

Love this! A nice change from the usual mantel piece :)

OMG...I love it all including the kittie!

love the ladder! and that aqua mirror in the background. you better hide that ... or no let me find out where you live, cause i'm stealin' that sucker!

This is awesome! What a clever way to reuse a ladder! Thanks for sharing with my Pink Hippo Party!

Oh my, how creative and clever are you? I not only want a daybed ladder thingy, but I want the needlepoint stockings, too. We had a devastating, total loss fire in 82 so I'm hearing you on the precious things that were saved! The things we mourned the most (besides the house) were all the family photos and wedding dresses. Sigh. Life moves on, bless you.

You rock girl! I just happen to have a "ladder thingy" that might work for our stockings! Thanks for the inspiration!

That is so clever. If I were actually using my fireplace I would want to do something like this too, but as it is it is not in use and my chocolate is safe. Thanks for sharing with us.

What an awesome way to reuse a piece! I love your idea! It would be perfect for apartments too.

Stopping by from Alphabe Thursday. . .

Was a lovely way to use that ladder!

I love the story behind the stockings and the fact that they survived a fire!

I love it! We don't have a fire place so I use the coat rack my husband made. I hang the stockings on each hook and topped it with a red and white Santa hat. I love the creativity of your stocking holder. Merry Christmas!~Ames

GREAT plan. And it looks terrific!

Wonderful idea. No, I'm not throwing that out! I just dug it out of the trash to make ____________. Hi, my name is Tina and I'm a dumpster-diving pack rat. Like I said, not throwing it away, but feel free to come over and we'll reach a mutually agreeable arrangement.

What a lovely ladder thingy! I am amazed at the quality of of workmanship on those stockings--very precious.

Haha! I love your ladder, and your stockings are beautiful. I guess Santa will be climbing down the ladder instead of the chimney!

What a cute idea! It turned out really nice. Very innovative.

That's very clever! I like the clusters of silver balls. Yep! No melted chocolate in those babies!

Love this idea! Such a neat way to hang stockings even if you don't have a mantle. The silver ball clusters are really gorgeous.

Thanks for a clever link!

Happy Holidays to all!

This is awesome! what a great idea (we have 2 wood stoves without mantles) it looks beautiful :)
you did a great job!
and I hear ya on the chocolate!

Bella @ Bella before and after said...

Sunny, girl I love your decorating ideas, and this one is another winner. Oh and did you texture your walls, or is that how the house was. It looks so old, and rustic, I LOVE IT.

I FEATURED this awesome ladder today, and thanks for always linking up to **AMaze me AUgust**